Slam on Russian Invasion of Ukraine 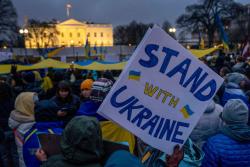 On February 24, 2022 Russia launched a full-scale military attack and invasion of Ukraine under the orders of Russian President Vladimir Putin. The Russian military is using weapons such as tanks and missiles in order to destroy densely populated areas in Ukraine. This has already resulted in the deaths of hundreds of Ukrainian civilians and produced hundreds of thousands of refugees with several million more refugees expected to flee in the coming weeks. Refugees are fleeing Ukraine because their homes have been destroyed and they feel unsafe in their own country.

Russia's military invasion of Ukraine is difficult to process and contend with for people across the globe. Protests against the invasion have begun worldwide and tensions are high. That's why we've created this slam - a safe space for you to share all your thoughts regarding the invasion. Your feelings, whether they are anger, grief, heartbreak, or just plain confusion, are all valid. In times like these it's important to remember that words are your own powerful weapon, used to take a stand and fight against injustice. It's time to make your voice heard.

Tell Me Why
In a dream, children sing A song of love for every boy and girl The sky is blue and fields are green
2 weeks 5 days ago

War - Invasion of Ukraine
Did you hear about?  Have you heard?  I have seen the news on the Tv
2 weeks 5 days ago

Ukraine
walking through rubble, trying to put aside the trouble, a strike at any moment,
1 month 8 hours ago

Hesitation
Leave, stay, it’s all the same anyway.Two sides pulling me, splitting my mind,shouting their own reasons, both equally
2 months 2 weeks ago
END_OF_DOCUMENT_TOKEN_TO_BE_REPLACED