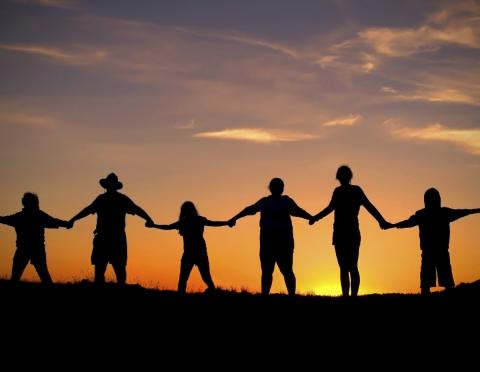 We, as a WHOLE, are missing acceptance

And that is all we need beacuse

I am pained when saying this, but I cannot lie

That we live in a world drowning in hate and prejudice

A world full of people that cannot, but MUST learn to accept and love

And a world full of people that cannot, but MUST unite as one

Through a glass screen, I’ve witnessed the pain and cries

Of a boy shunned by his parents for his homosexuality

How and why this even happened I don’t even know

But I can only sympathize for those shredded ties

Through Humans of New York, I’ve seen the good of people

Those Muslims fleeing the Middle East?

Can’t you realize that they aren’t beasts?

People hating them and fearing them, oh man it's prevalent

We may not know them, but there’s no need to resent

Through the voice of an absolute dump, I’ve heard a mountain of lies--

The lies that only divide us

When Latinos come to this land of opportunity

They become singled out as a mob of “criminals and rapists”

But many are too blinded of the reality

I am pained when I say this, but I cannot lie.

Weighing us down like a mouse stuck in a trap...

Through the speakers of my phone, I’ve listened to the lyrics

That Macklemore has preached

I wonder how long until everyone realizes that

Despite whatever religion or race or sexuality we may be

Underneath we are all the same and above all,

Despite the setbacks, I know this world is a moving timeline of progress

AND I KNOW In no time, an era will close to end the hate

An end to the hate to represent our fate.

And that is all I need-

Poetry Slam:
All I Need Scholarship Slam - CLOSED
This poem is about:
Our world
Poetry Terms Demonstrated:
Allusion

All I Need Scholarship Slam