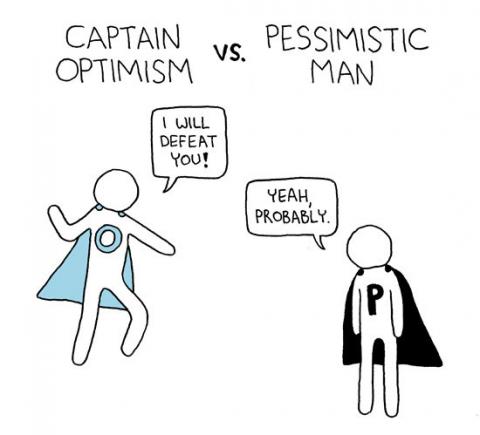 In which there is a debate between an optimist and a pessimist.

If you don't know what either means, don't be embarrassed.

An optimist always thinks that the world is full of hope.

The pessimist will just shake his head and say, “Nope”.

So do you think it’s right to believe everything is great every day?

Or see that everything is worse than the next in every single way?

Everything isn’t awesome, it’s not.

Yes it is, don’t tell me you forgot.

What do you know, you optimist?

Much more than some pessimist.

I’ll show you how it isn’t, this I will prove.

Then I’ll show you it is, so make the first move.

What will happen when the skies are gray?

Then the sun will come up to brighten up the day.

This isn’t about the weather which you can’t control.

We both know it isn’t, but thinking like that is the goal.

What do you do if you got a bad score on a test?

Just learn from your mistakes and remember to C-guess.

What help does that do? I thought you can do better.

Is this reverse psychology? Oh, you’re quite clever.

What do you do if you’re sick with the cold or the flu?

What’s wrong with that? There will be no homework to do!

Then what if you’re sick, with no cure in sight?

Then you need to stay positive, to be strong and fight.

What do you do if someone lied to your face?

You shouldn’t blame them if they didn’t want to be disgraced.

What if it’s worse than that? Can I hold a grudge?

Learn to forgive and forget. Don’t be the judge.

What if you liked someone but it wasn’t returned?

Then they didn’t deserve it, lesson learned.

If someone you love broke up with you, what is the cost?

Well you can be sad, for them. They didn’t know what they lost.

What if you’re the one who ended things, what then?

Then you’re saving your love for someone better than them.

What happens when you see an ugly reflection in a mirror?

(Looks) You see me as ugly? Why are you so bitter?

You know what I mean. It’s your own self that you see.

Well, I can’t find anything else there except you and me.

What do you do if someone made you cry?

Then dry it up, and say you were sweating from the eye.

It’s not that easy to do, as if you’ll even know.

What if someone died- And don’t say they’re in a better place.

Why will I say that? When that someone isn’t easy to replace?

You didn’t argue me on this, I’m kinda surprised.

You made a pretty good point, was what I realized.

What if you give up? Admitting your defeat?

Then you’re just letting them win. Your dignity they will eat.

Well, that’s already gone, what else can they do?

In the first place, you should never let them beat you.

What if you’re bullied because they think you’re of a different kind?

They just can’t appreciate you. People can be so blind.

Stop doing this, acting as if everything can be solved.

Everything can, as long as staying positive is involved.

Well what if I can’t be- No don’t bother answering that.

You can’t control if someone is called ugly, stupid, and fat.

You don’t know how it feels when I- I mean, someone is alone, sad, and scared.

If they are gone from their own hand, it’s not like anyone cared.

After all these years, you tend to ask yourself, “What’s the use?

Is being born an accident, really the best excuse?”

I do know how it feels, you think you’re the only one?

Don’t pretend you weren’t talking about yourself, I’m not that dumb.

I was like you, depressed about life, hurt beyond repair.

I didn’t know what the point was, and thought life was unfair.

But someone helped me, even though I didn’t think I needed it at all.

So like that someone, I will be the one to catch you when you fall.

I didn’t want anyone to ever go through what I just survived.

One way or another they will, and it’s their choice if they lived or died.

Not everything is as awesome as I thought.

But sometimes it is, don’t tell me now you forgot.

Poetry Slam:
Everything is Awesome Scholarship Slam - CLOSED
This poem is about:
Me
Our world