I suppose I've never known how people see me-

Not to say that I haven't thought about it a lot,

(much much more than I care to admit)

There was a time I didn't think anyone saw me at all,

And whether or not it was true, I suppose it was my fault

I was too afraid to let them peak behind the curtain-

is not quite so corny as it sounds,

As long as I can write,

As long as I can speak

I can lift the fog that surrounds me-

As an oldest child, bossy followed me through middle school

I faught to be a better person

I clawed my way through social anxiety

until I found who I was

I discovered a girl who was proud to be a girl-

with a paaion for clothes and proving she was strong anyway-

A girl who was also a young woman

A young woman who despised pointless agression and blame

Someone who strove to own her actions; good or bad

and 'go-with-the-flow' the next

afraid to be seen, but brave enough to step into the spotlight anyway

A girl who decided that if caring is a weakness,

then it was a weakness she would gladly accept-

and also NOT liking something just because everyone does

A little too self rightous for her own good

(I'm working on that, I swear)

Someone reasonable yet optimistic

Someone who could look in the mirror,

look into bright green eyes staring out of a pale face and say,

"I'm pretty the way I am, but it's time for a change. And that's okay"

Someone who feels at home when I'm alone,

but never wants to be lonely-

Someone who gets overwhelmed standing in the woods

because of the beauty I'm lucky enough to live in-

A woman who sings without realizing it,

a girl who can't seem to stop the music

yes, I found that person-

that fabulous imperfect and unabashedly free someone

that was me all along-

although I started looking for her to make others see,

and forgot the world-

far too absorbed in my own universe,

to notice that now I was looking for me. 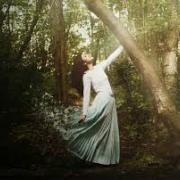