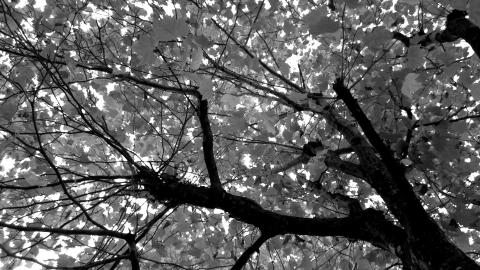 Evergreen frost and candlelit Dickens
and a faint tang of Crest cool mint paste
swirl around my teeth and dormant words
at only four o’clock in the morning.

My sock-clad feet are melting into muddy ground, as though
I were a snowman, standing alone in a foamy sea,
whose molecules waltz intimately in the thirty-one degrees.

Winter is a time of sleeping and waiting, sometimes of dying
But it is the trying times.
A kiss of icy fingers disseminates in a gust of wind from an open door
and I suddenly know that I am alive, and there is
fire in my veins that keeps the world alive too.

When the trees are shadows and dreams are lies
and beginnings are mortal and ends are forever—
They are the trying times that hold our breaths, if time ever dies

If ends are forever.
My gloved fingers tingle and curl in the sinking moon
and eyelashes catch snowflakes like wriggling salmon in Nome
and in a single crisp corporeal second is all eternity nestled.

Winter has always been my favorite month and this piece embodies it beautifully. It brings time to a sort of standstill almost as if the world was asleep but never will you feel more life flow through your veins or the bround beneath your feet. What inspiried you to write this piece if you don't mind me asking?

Winter might be my favorite season as well! If you couldn't already tell.

When I wrote this, honestly, I felt sort of stoned on insomnia. I was reliving a memory from when I was about four when I saw snow for the first time and ran outside with only socks on, and started thinking about how memories are always kind of vague like that.

So I started thinking about winter in general. Winter's kind of weird-- like, somehow there always seem to be more memories in your head in winter than any other time, and yet when you feel the cold, there's also that immediate sensation, that sense of "now," which is so unlike the hazy feelings you experience in summertime. It sort of struck me as a paradox, as if in winter you're able to live both in the dusty past and in the fiery present at the same time.

So, I dunno, that's sort of what I tried to write about.

But yeah. Anyway, I'm looking forward to seeing if you have anything I might read and comment on myself! Thanks for being so encouraging!

Im one of the admins but im kind of new ill be adding more of my work soon, As for what you said i relate completly though never could describe the concept as well as you just did. I myself also get that feeling in the fall though its just the sights and feel of these 2 seasons bring you back to past memories and emotions with certain things like the feel of snow or the sight of seeing fiery leaves falling from the trees. Great job ima try to post some of my own nature poems tonight.

Wow, I'll be looking forward to reading them if you post any. I think with those "fiery leaves" you've already gotten one half started, haha. I might try to write more tonight if inspiration hits.

An admin, huh? That's pretty cool. I'm curious, how did you become one?

I just got lucky, they guy who started this was hiring and i happened to be in the area i guess XD

and thanks I love imagery so its a habbit for it to come out in my regular speaking cause i am an artist as you are a bookworm, been trying to read more books to help with my writing as well any recomendations

My absolute favorite line in this poem would have to be "Evergreen frost and candlelit Dickens." I'm not really sure as to why but it just caught me so much. I love it dearly. I'm a classical reader so it called to me. This poem is absolutely beautiful; the line: "A kiss of icy fingers..." Is just one of the lines you used with such beautiful imagery. Thank you so much for sending this in!

I always like to think that winter is the time where everyone remembers life- spring and summer both before and after this season, where everything is either blooming and rejuvenating or vibrant with life. Have you ever wrote about any other season?

Hey, a fellow classics reader! That was so sweet of you to say that. Luckily the good lines seem to be in the beginning, huh? ^_^ Sometimes I have trouble starting my poems, so that was nice to hear :)

Well, I have to admit that, out of all the seasons, winter is probably the easiest to write about for me. I probably use more cold imagery than warm in my poetry, even when it's not directly about winter, per se.  I did write a sonnet about fall and all the butterflies migrating together to a place where they'll die together when I was a freshman... it was a pretty bad sonnet, though. Really bad meter. I guess winter is sort of a sad, reflective time, usually, and it's easier and better, generally, to write sad poems than happy poems.

So, I guess there's not a ton of variety in terms of which seasons I've written about... but you've sort of inspired me to give it a shot! Maybe I'll write a series of poems assigned to each season. I kind of have a good background topic for it in mind now, too. Have you written a lot of winter poetry yourself, or other seasons? I'm planning to read some of your poetry, if you've published any, after I post this reply... so I guess I'll see?

And I'm also a teeny bit curious about what kinds of novels you've liked. XD

"When the trees are shadows and dreams are lies
and beginnings are mortal and ends are forever—
They are the trying times that hold our breaths, if time ever dies"

I love these lines and your entire poem immensely. As if your username doesn't appeal to me enough already. v.v Keep writing such lovely poems :)

Your poems are wonderful too, you know. As well as your username... hmm, sounds like I might be plagiarizing your compliments ^_^;;

But, yeah, I'll keep writing and such, maybe even tonight. Thanks so much for the read XD You keep on writing too!