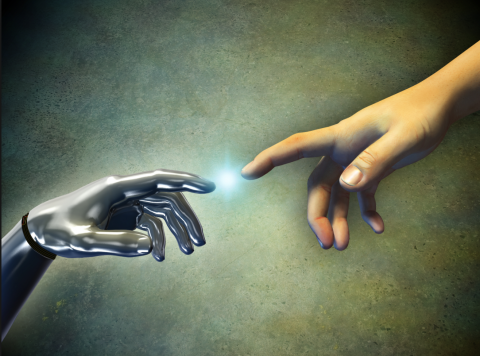 There lived a mad scientist, a man that dressed in blue.

He had perfected the art of granting sentience to bots,

But while his programming was great, his craftsmanship was not.

Through the window of old Geppetto, the man in blue took a glance.

He saw a robot with lifelike features, he entered to seize his chance.

He programmed the machine to walk, to blink, and to speak.

With a transmission of his own voice, he made the machine think.

Now came the time to test whether this consciousness was true

The man in blue was thrilled, he envisioned great riches and fame.

“I am your consciousness, boy. Pinocchio is your name.

I will teach you how to think, how to feel, how to dream.

You’ll be able to fool the world, but you’ll always be my machine.”

While Pinocchio was sent to school, the man in blue followed from afar.

He tried to save Pinocchio from troubles, but securing obedience was hard.

After his first daring rescue from a captor’s prison cage,

The man in blue decided that it was time to make a change.

“No more lies and disobedience, or you will destroy what we’ve begun.

For every fib and misbehavior, your battery supply will drop by one.”

But Pinocchio was changing, he more longed to be flesh and bone.

He was becoming more aware, learning how to think on his own.

Pinocchio fled to Pleasure Island in an attempt to be free.

But when the man in blue found him, his power dropped by a degree.

The man in blue was startled when Pinocchio turned to him and said,

“Let my mind be free! I want to be Geppetto’s son instead.”

The man in blue grew angry, he would not lose what he had made.

“You belong to me! Disobey, and your life will soon fade.”

Back at his empty house, a voice thundered in Pinocchio’s head.

“You must obey me Pinocchio, your battery is almost dead.”

But Geppetto had gone missing, held captive by the man in blue.

The cost would be severe, but Pinocchio knew what he had to do.

On a boat he spotted Geppetto, Pinocchio swiftly pulled him ashore.

But the man in blue had emerged, his eyes madder than ever before.

“I told you to obey me!” The man in blue started to yell.

Pinocchio began to power down, his parts clanged as he fell.

Geppetto’s heart seared with pain worse than all pains that are known.

“Can’t you see he’s real to me! A boy’s thoughts should be his own!”

The man in blue began to think as Geppetto’s tears soaked the floor.

He recognized the old man’s pain, he had lost a son many years before.

As he stepped ashore, the man in blue approached the bot.

He repaired the machine, back into the world Pinocchio was brought.

“He is yours, Geppetto. He knew the cost of setting you free.

But his love overpowered fear, he is as human as could be.”

Away the man in blue sailed, Pinocchio’s old transmitter in his hand.

The joyous cries of a father and his son echoed from the land.

No matter what it’s made of, whether it is big or it is small.

A mind that loves, longs, and hurts, is one to be cherished by all.

2017 Once Upon a Poem Scholarship Slam Pinocchio