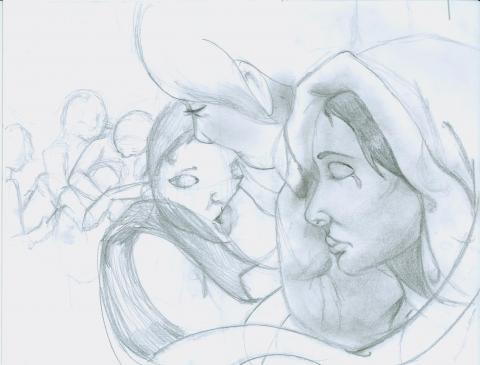 A young girl named Sarah and her dog were playing in the dewy grass,

And nobody knew what was coming

Not even little Sarah nor

It wasn’t their fault the gate was left open

The first day the gate was ever left open

Was the day everybody would remember.

There, right in front of him, everything he imagined,

He flew through the air with his paws gently touching the cool cement,

His tongue flailing through the air,

And the cars rushing past him.

Panic was creeping through Sarah’s spine again and

She felt the terror slowly paralyzing her body

She was then sprinting after Bentley

The only thought was,

“Does he not love me enough to run away?”

Suddenly, his nose found him another trail to go to.

Another dog was across the street;

All he heard was screeching tires then

A loud ringing noise buzzed through his ears

While a white blissfulness overcame his eyes.

Sarah finally saw him running down the endless pathway

Her thoughts consumed her heart ache

All she heard was a monstrous van drive past her

She saw Bentley turn towards the road as the van was approaching him,

Bentley was struck and Sarah was horrified

Her legs crumbled beneath her as her world was too

She fell to the hard cold black ground next to the lifeless mass of fur.

It wasn’t their fault the gate was left open.

Poetry Slam:
It's All Up to You (CLOSED)
Guide that inspired this poem:
Stand Up for Animal Rights in 7 Steps