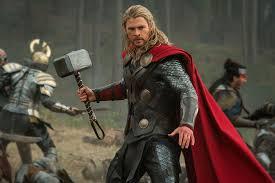 Prior to the season opener

Out stepped from the locker room

Was a man who cut a tall and handsome figure

A man for whom the expectations of the upcoming season

Never seemed to weigh in the slightest

A man who exuded the utmost of confidence and belief

That absolved the other players of any apprehension

Coaches glanced up from their notepads in awe of the man

Who was their star player and captain: Thor

Thor carried his baseball bat at his side

A bat that was well-worn.

The wooden part of the bat beneath the layers of paint

Mud stains were abundant on the surface of the bat

Yet the bat showed no signs of yielding

Neither did its bearer

When the time came to step out onto the field

The players were lead by their intrepid leader Thor

Reassurance among the players

Everything was going to be ok

Thor took his position at the front of the line

The rapturous applause from the fans travelled through the walls

And into the hearts of the players

The look of determination had graced Thor's countenance

Would get in his way.

Upon taking their positions on the field, Thor stepped up to the plate

With the bat firmly gripped in his right hand.

The opposition pitcher, with the sun's glare in his eyes, threw the ball

Slightly rightward from its designated position

Nevertheless, with one swing, Thor sent the ball flying outside the park

For his 1000th career home run

Poetry Slam:
Modern Myths Scholarship Slam — CLOSED
Guide that inspired this poem:
Why Should You Write a Poem?