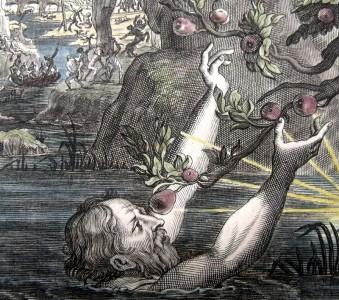 I was a filter

Taking in the darkness and unable to let go

All light would pass through

I tried to grasp at its intense unknowable beauty

Because I knew it was precious and needed

But it slipped through my fingers every time

I knew the pain of Tantalus, starving and grieving

Of the unattainable pleasure that awaits

However in time the darkness built up inside me

Spoiling, festering, a disease of the world

I despaired, because there was no cure

I was bombarded with a feeling of suffocation

I crawled, heaving. I panicked, for I could not see

Collapsing, I cried out a broken, strangled, sound

Is this how I am to go, blind, smothered?

Am I going to be left starving for something more?

Yet as I lay, an inexplicable thing happened

The cries of the needy

More joined, and it became a hum

It pitched in frequency and became a frantic melody

Their discord rushed and warbled in my head

I heard the people undone by themselves crying out

The very wail of angels as they fell

Screaming with the agony and brokenness of being cast away

The sounds of wars being lost or won

The voice of Pain was speaking to me

I was immobile, no longer myself, but a memory

Then the voices changed slightly in tone

They became interwoven into a paradoxical fabric of misery and mirth

The fabric was seemingly warring with itself, threatening to rip apart

Held together by something just out of reach

Until the sounds of joy and victory became dominant

I heard Euphrosyne and her sisters singing, Nike chanting

Songs of human love and victory over damnation

And the elation that follows

I feared I had gone deaf

I retained my senses

And a light appeared beside me

Compulsively, I gazed into it, and Heaven spread out before me

My body shrieked with a lovely sensation, and I became whole again

The light infiltrated my senses all at once

I was caressed by love personified

Her harsh sweetness opened every pore

I was stripped, completely exposed

yet was completely free

I tasted and smelled something other than shadows

Suddenly I could take that first taste

that eludes me no more

Once in my grasp, the light was not all that I had dreamed it would be

For living up to romanticism is impossible

Now I take in both light and darkness

They are contained inside me, sometimes quarreling

Once blinded, I am able to see the immediate world around me

I can see other dim lights in the distance

Some closer in proximity, all traveling with me

I hear their chattering voices

And am comforted in the fact that I am not alone

I whisper a thanks to the light beside me

It is not as bright as I thought it originally was

It too, is partially dimmed by darkness

I find a sort of solace in this sameness

And together we continue On

Poetry Slam:
My Year in Poetry Scholarship Slam - CLOSED
This poem is about:
Me
Poetry Terms Demonstrated:
Imagery

Life depression ' You Me And Poetry Scholarship Slam ' love