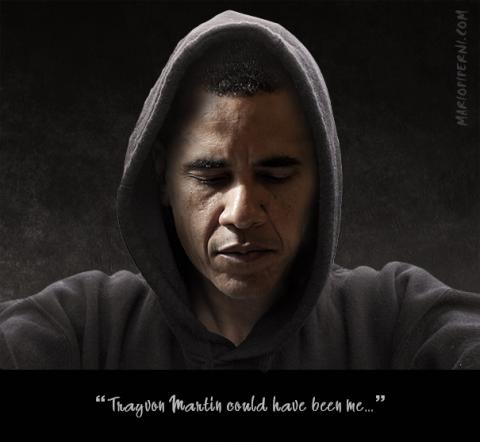 In theory I never knew the weight of the hoodie.

Contrast in its color as it grapes over my skin.

Indeed I was mightier with the cape over my lens.

Strolling pastimes, my ears were shuttled by noise.

At the slightest touch of wind, my hands become cold;

so I slightly bring them in before they began to mold.

I feel a drop here and there, so my legs pick up

the slack of time that never seems to appear.

A trajectory of my image pastes the light,

now to only display my image three

times bigger than what it really is?

Making it seem as if I was fleeing the scene,

only a coward would see this as suspicious;

the characterizes of my only witness.

If it was true that I was a black male walking,

then it was true that a man was stalking.

there is to know about discrimination.

I could represent and testify on many different

stipulations on why this was of segregation.

First fact would be one, if I was a white male and it was

dark outside, you would had pulled over to ask if I was ok.

Second if you were truly a watch man of my community

I would have known you, two you

would had asked if I needed a ride.

I mostly would had said, “I would be fine

and that I just live around the corner.”

Third would had been like, he told me to be safe,

because there’s dangerous people out here.

So as a black male, why didn’t you pull over; isn’t it your

job to protect your community even if I was the danger.

That what a true man of watch would have

done, not some racist towards my kind.

That’s something I didn’t need nor wanted.

Bright lights shining at my face,

On many different sceneries you played me as

predator, yet people seem to play you as a victim.

Words of stories mixed overtime and the

nasty aftertaste of riddles are just left behind.

Yet time after time I was left bleeding, I was the victim;

I begged for my life, because I thought it would be taken.

I was the victim, I ran, I tried to get away, and now

Where are my things, where ware my dreams, where are

my innocents, because there clearly wasn’t any justice.

The digging up of past reenactments, a photo left out of

It’s frame, and yet it never itched you the

wrong way that I was taking all the blame.

Yet I never got that plead of self-defense, nor a jury of my own kin,

and neither did I get a certificate of significance.

Do you now understand my call of innocents?

A fact of nonrealistic actions, that never seems to make its captions.

Is this what I would be left with, a lifeless body

This can’t be justice, I’m only a teen learning of

mistakes that doesn’t seem to affect me, the trail at hand

might be figure left in the sand, but please I’m only a young man.

See George Zimmerman is a grown man, he made mistakes that lead

him to understanding what is right from wrong.

Yet I’m a teenage just trying to find my limitations of my futile decisions.

I never got to make that mutual decision that would had mutated me into that vision.

Sometimes labeled as that child walking the streets,

as he listened to his music; enraged by his influence,

sets of kinds that would resemblance a beast.

He might have thought that wearing his jeans to his knee was something of thug action.

This kind of reminds me of 2pac, when he got shot.

It wasn’t the influence of the streets that lead to his death,

it was the people who were surrounding that were left.

Sometimes the prime suspect is the one that was less check.

MLK had a dream, Malcolm-X had a vision, and Obama had hope.

As for me, my dreams were taken, my vision of success and

to change my faults and mistakes were stolen, as for my hope will be lost

and now I’m left with thoughts of millions waiting for my return.

I’m a voice ready to be heard, yet my dreams of salvation were taken;

my vision of change that represents the racism at hand

and my hope of my future kin’s life are at danger.

I’m ready for the millions to hear my words that shall be spoken.

I fear that our lives are in danger, the invisible tangible things that massage our brains.

The madness that plasters our veins is just one of childish things that remain.

I hope you understand that the varnishing of our names will be the last that will be seen.

I might be damned, but you’ll never keep me from giving.

The greatest gift of my life is my generosity towards your understandings.

It might seem impossible to invoke onto this mission, but: your dreams of liveliness,

your hope of completion, and the vision of a journey will never deceased in my image.

I’m a child who sees the innocents, the child

who sees the diseased in the children of no means,

and the child who believes that there will come a change.

a change that we will never see coming, and I will be there to guide you;

because I am a man of generosity and I will never forget your kindness.

Please comment as much as you can. It motivates me to write, when i have an audience behind me. Thanks

this was a story that need to be told. thank you for this. I was brought this story, put in the shoes and

and body of this piece. This could be a speech, short story, poem, essay, aanything

that allows the world to hear outloud what this is.

this wisdom and nourishment needs to be shared with communities, so

progress can happen. this is the kind of piece that engages the mind and heart

without permission; it allows the soul to listen and understand the truth

this could easily be a letter of courage and forgiveness. continue this, please.

this is much needed for education, internalization, and empathy. be the heart of

First off I would like to say thank you and that I wanted to make something real, something realistic to the protected world. People who could relate to hursh words, treatment, and a stranger to the different cultures. The discrimination profiles of such things as a hoodie, but don't get me wrong here; it really shouldn't be ok for people to sag there pants. Being in the black culture should be something to be proud of and not something nasty and disgraceful.

Words can be really powerful, but are the styles of ways we dress mightier than our speech? This is the question that everybody should ask themselves, because if you saw Obama like that and didn't know that he was the President; would you judge him? Yet does his image discredit his words, even if his words hold encouragement? I see things as a blank canvas, something of lost wondering; yet has so much potential. This is the same rule I apply to my book and pen; one has a purpose and one has a reason.

This is amazing. Where I live, I haven't actually heard a lot from the african american community about the massive injustice your topic, so I loved to hear what you had to say. It was raw and beautiful, thank you for sharing!

First of all, thank you and it's always good to say a few words than not say any at all. I try to look at everything as a whole and not judge, but when something like this happens; you really have to hit it hard. Just shedding some light on how alot of this happens all the time, there's a lot of cases that don't even make it on the news; let alone get worldwide.

Thanks again and check out some other things I did too, I got a lot to say these days.

All i can say is amazing