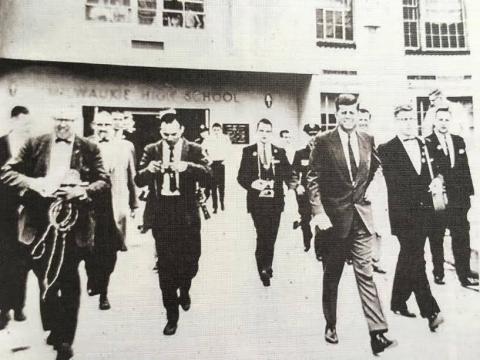 Starry Eyed was what I was, when I began the year,

Like every year I hope and pray, with certain lack of fear,
And with every aging day I'd feel myself become a Comet, because-
No difficulty can prevent me from finishing what I promise.

Graduating high school is what I've set myself to do,

Attending college right away, with success as my pursuit,
But a conflict laid itself across my Comet's waking path;
The high school that I so adore,
Won't be standing when I pass.

They tell me they want my school torn down,

It's veneer has lost its charm,
Because compared to other high schools,
Ours feels subordinate and worn.

They say, we've been cheated and deprived

Within this antiquated structure,
But when I look at other high schools,
I see prisons of the future.

All they say is untrue,

Our school is cultural and historic,
JFK has walked these very floors,
The same floors I walk for it.

So I set out to defend it,

As the comet in me does,
So that maybe later generations,
Can see the school I loved, because

Our school has something others do not have,

Something built into its name,
A community like no other;
A meteor shower that could never be tamed.

So, I stood up in front of architects, consultants, and teachers

I preached about its value, its history, its features.
The speech I gave was lengthy, and had me fearing for the worst,
Yet the outcome I received was worth all that I’d rehearsed.

The Comet in me, I thought

Lost its battle, certain for defeat,
Because I cannot change these minds-
Minds who want this school in rubble at their feet.

But hope was not yet lost,

When word came to me, one day,
From the principal himself,
Still Starry Eyed in his own way.

He said, join the design team

So that what you love will stay.
“It’s kids like you that make this high school
What it is today.”

Starry Eyed, still I am, within my Comet’s every molecule

Because now I might be apart of the history of my Milwaukie High School.

Poetry Slam:
My Year in Poetry Scholarship Slam - CLOSED
This poem is about:
Me
My community