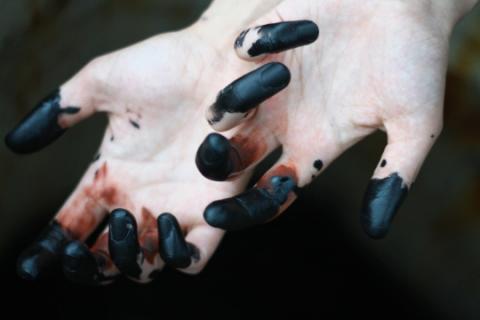 a world too violent, too aggressive

me, a minority among minorities

my mind too fragile and my thoughts too intense

but my hands always served to protect me

scarred yet proud of their less than elegant job

the only non-delicate thing about me

was the way my hands never recognized their own strength

and would snap in half anything that got too close

and then she appeared

she didnt rhyme the way i thought she always had to

her curves were magnetic; jagged and twisting

her similes and her metaphors

felt like a language i had been born to speak

yet never had a chance to let roll off my tongue

and she was gold

coating my palate and drowning me in her artistry

i stuck with her because my hands were drawn to her

they wanted nothing more than to recreate her in infinite combinations

or pick at my skin out of anxiety until i bled

they wanted to forget all the work they had done

forcing me to stay alive

in moments where i would have rather drowned in the sun

they couldnt bear to face themselves and what they had done

and letting them slip right through my harsh, calloused fingertips

my hands no longer wanted to linger in dangerous places

wanted to pen a cheery "hello"

they didnt want to cover my ears whenever someone would yell

they wanted to stop protecting my fragile mind

too delicate for the violent undertow of the ocean

and eternalize their beauty in words

and what used to be a body's worth of red marks,

a canvas of hatred and anger and pent up fear

was now a notebook, brimming to the borders in spilled ink under her name

in this world, beautiful things have never been particularly kind to me

to be consumed with something as beautiful as she was