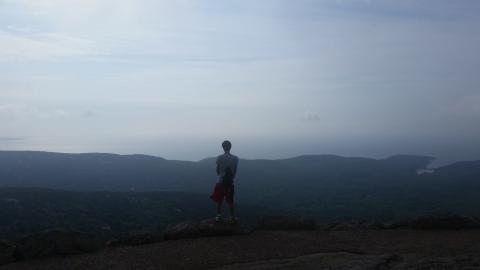 sounds uttered at once through

into the abyss within. The ball drops and

I can hear it smashing into crystal

shards, thin daggers into a heart so pure

it could not feel the wind rushing against

its face ahead, the basin of wonderment

that passed on by.

The seasons became a succession

of memories that lasted a century or a second

at a time. Only seventeen years were forgotten

in a moment, their laughter preserved in amber

encircled by the jade pendant that lay against

my bare breasts under the shower stream.

My breath clouded the wind as I took a glance

into the winter night sky. There were hawks

beyond the moonlight, shadows flying into night

and falling just short of the hallows. I spied an emblem

of the eve, and the wonderment returned of the

Enough seconds to pass a lifetime of a small

nectar, a mother's wailing cries into a crowded bus

where only cameras faced away from her battered face

as she moaned into her lost son's sleeve.

To have witnessed a yellow sky while dimples

were shunned away from tightrope stretched skin

so tight it could hardly even breathe. Eyes squeezed

shut to block away the ringing of the darts into the air,

except they were not darts but bullets so fast they

were gone before they arrived.

It was a time of change, when sleeves were shared

among friends and time was cherished more than faith

could ever show, when daughters were bound by

invisible strings to dance away and the time ticking

away faster than a beating heart tapping away at the life

line left to hand above the heads of those who lived.

When enough were around to hear the sounds

scuttling underbrush, to witness the continuum of

the songs they sang before they too retreated away,

but not before leaving behind a forgotten lyric of a

time not quite lost anymore.

Poetry Slam:
My Year in Poetry Scholarship Slam - CLOSED
This poem is about:
Our world

This poem is amazing, inspiring, and beautiful.