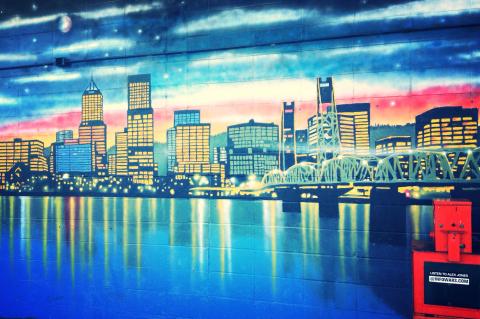 As I drive, watching my city streets roll past me

I see the tear stained faces of broken homes

And children being raised by strangers.

I see the garbage cluttered streets of SE,

And a homeless man with no shoes on his feet,

Pushing a cart full of cans,

Pan handling for his next dollar,

On Flavel, love has not prevailed

A drug dealer is driving a Mercedes,

In a Caprice based neighborhood.

He was one of them once,

One of the hoods very own.

J’s on his feet, a sweet baritone voice,

an absentee farther, and an illegitimate daughter

His future had no direction or choice

Peddling, a mill a minute, cause he earned it,

So even though it ruins lives, "it’s Ight".

So he rolls some up and lights his way to oblivion.

He gives into the undeniable bliss of all that this is,

Or at least what he thinks this is Yet when he walks out his door,

So what is "happening", just isn't happening

Or the bodies in the morgue,

He is blind for he wishes not to see,

Even though he causes the same pain that resonated within a child,

While he slept on liquor stained carpets

Hoping that tomorrow would not end the same way yesterday started

He was that child, tired of fending for himself

So he allowed himself to delve into darkness

And allowed it to become a part of himself

And his parents wondered why he was always backlashing,

Trashing his room, every time life didn’t go his way.

Because he was never taught to fight for the things that he desires,

He would rather leave that up to God,

Some sort of higher power, towering over his life.

Dictating what is wrong,

And even when all can be seen,

Because the sun is shining bright,

He doesn't take his chance.

Too much blood has already been spilled,

And it’s all on his hands.

He has been treated second rate,

never acknowledge for his service to the streets,

Instead he is faced with inevitable defeat