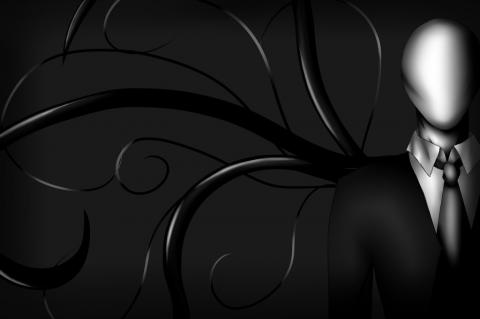 Alone and lost in the forest with only the sound of your feet hitting the dirt, only your flashlight to light the way you feel as if you're the only one left on the earth.

Static flares on your flashlight as you feel inclined to turn around, your body starts to shake as your static sound grows louder.

Standing behind you a shadowy figure more than ten feet tall and the arm length to wrap around you more than three times over, using his extra limbs he takes a hold of you before you can even blink, he's invading your thoughts you can't even think, you just might think that your life is over.

Welcome to the slender sickness he's chosen you to be a minion, to help him in his chaotic plan to bring death to people your first contract has been given.

But the legendary mytho is only a mytho a fan fiction there's no need to get too involved, but two little girls wanted to pledge their loyalty and the degree of it wasn't small.

They took a knife and stabbed their closest friend trying to kill her in honor of the faceless demonic entity known as the Slender Man, "We wanted him to take us to his far away land."

Please be wiser have the sense to realize what is real what is not, or else you could wind up serving a sentence all because of your "Loyalty" to an entity however the only land you'll be in is the cell in which you will rot.