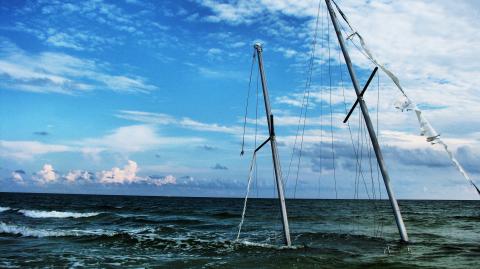 The stars and the sea mark their distance
She breathed in what was left of the ocean air
She stood by the water, sailing with a new sense of dare
7 destinations just waiting for her
She chose number one with her eyes closed
To where the stars never shined, but new shadows posed
She listened to a flock of birds singing next
To which led her through a darkness and a storm
She slept through destination number three
Waiting to be told where she should be
With impatience and bitterness, she missed an important sign
A piece of land she never knew she left behind
To number four, she casted away her fears
Trying to rush, missing out on so much throughout her tears
Onto number five, she got back on her feet
Pulling out a map she decided to follow
Unclear of directions, she ended where she started
Laid down confused, she felt her heart become strongly guarded
Approaching number six, she looked up and prayed
Caught a glimpse of the same old stars, but with different faith
At the sixth destination, she sat and waited
She came across a far away island where all was gated
She jumped into the water onto her seventh destination
Swam under the gate following God's voice
Came to a shore with all that she needed
A part of a purpose underneath the earth seeded
With no more doubt and hesitation,
She knew that this was her final destination