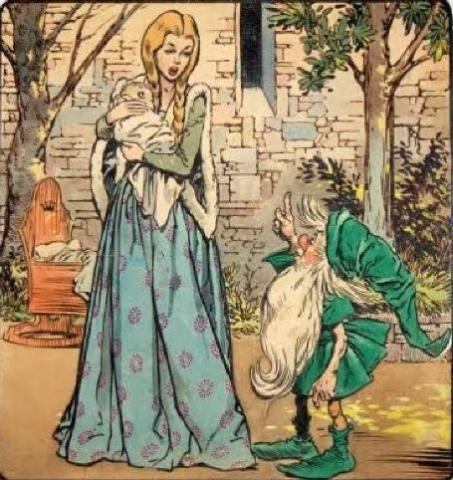 (How Rumpelstiltskin came to be, and then, how he came not to be)

Not too long ago, and not so far away

He went to great ends

to try to mak friends.

They laughed and mde fun of him, day after day.

because knee-highs, for other guys came to his chin.

He walked with al limp,

they called him "the imp,"

and laughed when the teacher screamed, "Rumpestiltskin!"

His bullies grew older, grew up, and got fat,

but poor Rumpel never got taller than that.

He tried, but could not just ignore their chit-chat.

All that he now wanted was someone to love,

who would look up to him, notdown from above.

And so he thought, maybe,

if he had a baby,

it would fill the hole he could not get rid of.

There was a small problem with wanting a child.

No matter how often or hard Rumpel smiled,

his toil and his strife

would not woo a wife.

His short legs and long name could not be re-styled.

He switched up his wardrobe and gelled up his hair,

but his impishness still gave ladies a scare.

If not for his looks,

the money his smarts could bring in, they could bear.

Still wanting a child who would watch him grow old,

poor Rumpel would not falter, nor would he fold.

He made a few tweaks;

in less than two weeks,

he taught himself how to spin straw into gold.

Excited, he now thought that he had a chance.

He giggled, and smiled, and broke into a dance.

But to his surprise,

right before his eyes,

his village had packed up and moved off to France.

Rumpelstiltskin shivered, and shook, in a rage.

The feeings he felt, he simply could not guage.

They'd had kids without him,

told stories about him,

and then, they'd abandoned him turning the page.

He stormed off to the forest to go and cry,

and while he was there, he looked up to the sky.

At half past the hour,

he had found a tow'r,

and, shaking, he climbed it, without knowing why.

He climbed through the window, and there, what he saw,

was a sad girl surrounded by piles of straw.

"Do not be afraid,

said the imp, as she opened her trembling jaw.

It turned out the king had imprisoned her there.

Her father had boasted, and swaggered with flair:

"She turns straw to gold!"

Or so he had told.

To do that, the poor girl did not have a prayer.

The girl was in need of his help, it was clear.

She stifled a sob, and then let fall a tear.

"If I'm not done tomorrow,"

she said, filled with sorrow,

"The king will kill me, and my father, I fear."

And so Rumpel helped her, that night and the next,

and also a third, though his conscience was vexed.

'Cause here was the thing:

and he would be left all alone and perplexed.

So, then, on that third night, he thought up a deal.

The girl had no choice, and no chance to appeal.

And so she agreed,

would be Rumpelstiltskin's to care for with zeal.

She thanked him profusely; he went on his way.

She forgot the deal for a year and a day.

the Queen was expecting,

came calling to come take her firstborn away.

But now, she was mad. She'd forgotten about

the imp that had so long ago helped her out.

He tried to be kind;

she'd left him behind.

She's just like my village! he wanted to shout.

Instead, he felt mercy, and proposed a game.

"You can keep your baby, if you say my name!"

He knew she would not,

and so now, he thought,

that, at last, the baby was all his to claim.

He came to her room for three nights, and therein,

she seemed quite confused, and he mused on his win.

The last night she sighed:

and your name, yes, it must be Rumpelstiltskin!"

Tears came to his eyes, then. He knew from the start,

though he would love that baby with all his heart,

the thing of it is,

the child was not his.

And that, in the end, is what

(If you know the true tale, you'll know why that last line is significant. Thanks so much for reading!)