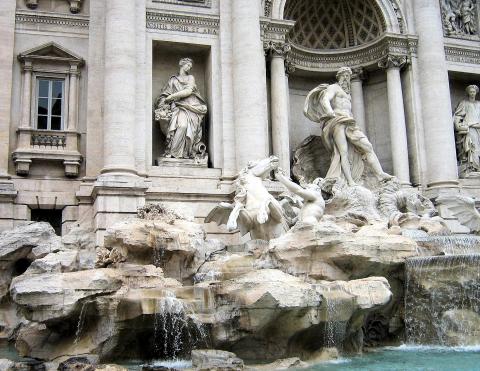 When you visit Rome, it is as if history beckons,
All other thoughts are secondary to reckon,
Stunning architecture and ruins does the mind conjure,
While being tempted to look at the bigger picture

Marble sculptures adorn numerous buildings and landmarks,
Their sheer size and natural look surely leave a mark,
Said to be influenced by the ancient Greeks,
And perfected by the Romans as seen in most tweaks

Vatican is reportedly the smallest state in the world,
Christianity hails it as the holiest place in the world,
The City's museums, chapels and gardens lend a scenic splendor,
Making it an enchanted place with little to wonder

St Peter's Basilica is one of the largest churches in the world,
It's sprawling mosaic interior and impressive art is way out of this world,
The incredible Michelangelo dome will always be entrenched in one's memory,
Climbing atop the dome for a panoramic city view is anything but dreary

St Peter's Square is the vast spectacular square in the Vatican,
It is quintessential with an opulent air that no one can question,
Majestic columns and pilasters flanking the square are an architectural marvel,
That it can hold more than a quarter million people is for the mind to unravel

The Sistine Chapel is proof of Michelangelo's transformation from sculptor to painter,
Reflected in the ceiling depicting the Book of Genesis's nine episodes as you saunter,
The gallery paintings portray detailed maps of the world in the sixteenth century,
Remaining etched in visitors' memories when leaving the Vatican eventually

The iconic Flavian Amphitheatre (Colosseum) is a major landmark in Rome,
Majestic arched entrances and thoughtfully designed seating impress as you roam,
The arena and cages where gladiators combated wild animals bring painful memories,
Of a bloody sport that people flocked to witness, as if in a reverie

Trevi fountain's theatrical architectural marvel is a sight to behold,
Little wonder that visitors come in droves with so much to be told,
Coins thrown in the water portend a return visit in Rome's favor,
Group euphoria and endless clicking of selfies are memoirs to savor

Spanish Steps is famous for its elegance and unique design,
The Barcaccia Fountain at it's base adds to the scenic outline,
People relax for hours at this traditional meeting place,
The annual summer fashion show here though, is never commonplace

Rome is no exception to Italy's famed gelato,
People slurp on cones with considerable gusto,
Gelato is creamier and denser than ice cream,
Its such subtle differences that make it a scream

Rome, as the rest of Italy, is a gourmet's delight,
Trattorias, aka informal ristorantes are a common sight,
People swarm these eateries that offer great variety for a bite,
Can there be a better way to whet one's appetite?

It is a city that is always teeming with tourists,
With a colorful spontaneity that is difficult to resist,
Brings to mind literally the phrase "All roads lead to Rome",
As memories continue to linger long after one heads back home