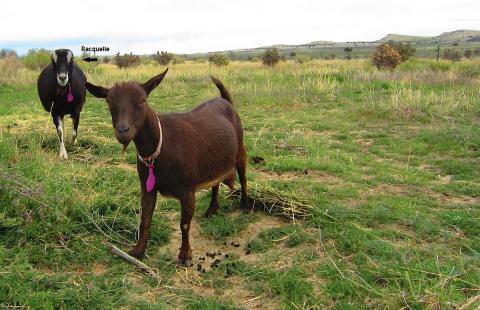 A young kid shows up at her brother's gate,

already soaked just from looking at the Colorado scene.

God knows how she was chosen for the job.

Yet there she is, ready to be a farm machine.

That pink-faced blob of adipose was me,

I'd never felt hard labor... at least not that hard.

Not hard enough to do me any good.

an unsatisfied void gnawing down to my soul

left over from my neice's Lyme Disease diet,

which prohibited everything delicious, nutritious, and whole.

It was on that same dairy that little, starving fetus-me

met the beast that was called Racquelle.

She was my nemesis off the bat, my sworn enemy.

She made my life a living hell.

She'd try to "fly the coop" every morning without fail.

And more often than not, she'd make it pretty damn far.

At twice her weight (though I was dropping fast),

my weak being was still no match for her power.

My mom laughed because it was silly.

My sister-in-law just rolled her eyes.

A runaway goat was the least of her problems,

and it should have been the least of mine.

But I had never known a frustration like Racquelle.

I had never known how it felt to work till I was numb.

I was so unused to the stress of farm life.

That just wasn't the environment where I came from.

Still, I smiled and laughed it off because

I couldn't imagine my brother and his wife doing this alone.

And, if I could help them, then I should.

So I didn't voice my inner groans.

Whenever I meet someone who tries to give me hell,

I just smile and laugh it off and say,

"You remind me of someone I used to know.

Poetry Slam:
I Am... Scholarship Slam - CLOSED
This poem is about:
Me
Poetry Terms Demonstrated:
Hyperbole