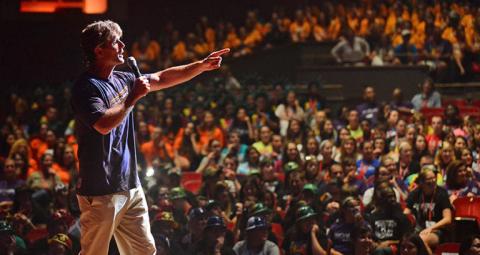 Where it could possibly originate from makes it an enigma.

See, but that’s a long story.

Even a bit gory.

Being born with or developing a disability,

One is automatically subject to scurrility.

“Endowed by their Creator with certain unalienable rights,”

Buck vs. Bell left the eugenics to their own sights.

A better world they said,

Might be better if all their future children are dead.

All because the industrial world wouldn’t allow them to pay their rent.

The jobs required too much from them mentally and they gave them no aid,

United countries are the least harmonic.

Everyone is on their own, creating a self-centered community.

Still seen as a failed attempt or just plain dumb,

People with disabilities were forced to live in the slums.

Lump summed up with the mentally ill,

Trying to cure the issue with a little pink pill.

It wasn’t until the 70s for someone who was legally devout.

With that term came a new situation.

Retarded was used as an insult meaning slow,

Trust me, we still have a long ways to go.

All throughout time and even still now,

Pick on the unassisted and begin a row.

All it really is is the lack of awareness and education,

And finding the right step with each inauguration.

Kennedy was the beginning of legal reform,

Doing a good deed to provide the service.

With their program, the stigma may come to an end.

All it takes is the proper knowledge.

Give them their well-deserved homage.

Nobody is above the information,

Because of it, everyday we have a more socially aware population.

You can be incredibly intelligent, may attend Harvard,

Tell me, when is the last time you said the R-word?

Poetry Slam:
Annual Emerging Poets Slam 2017 — CLOSED
This poem is about:
My family
My community
My country
Our world
Guide that inspired this poem:
Write about the social issue that matters to you the most.
Poetry Terms Demonstrated:
Rhyme Scheme