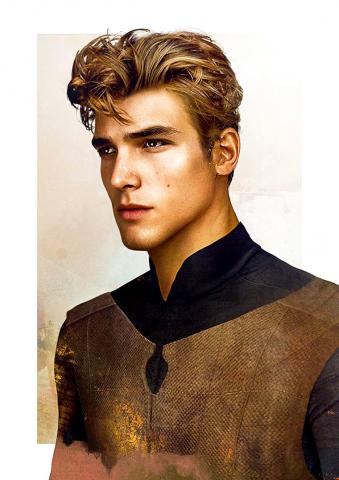 This sounds like a typical fairytale, so for introductions, you don't need one.

Sat on a throne was very old king.

And on his side, was his beautiful wife and the queen.

Their son Sebastian was slumped down all the way.

in his chair that was dressed in velvet on apparently this dreadful day.

You see the King is becoming old, his face quite wrinkled, no longer firm

The Queen remains the same, her legs barely able yearn

In saying this, it's time for new leaders.

The king stood on two feet, his staf that stood a meter.

"For it is today my subjects, that my only son,

Will chose a girl's hand in marriage, but not just anyone.

She has to be wise, kind, yet strong.

Let's have the women line up, you're introduction should not be long."

Sebastian rolled his eyes as the women scattered to queue.

Today was the day one girl's life would become brand new.

But the young prince only stared off as they spoke.

And the line went on forever, the poor boy struggled to stay woke.

The last woman finally went, and she was no different from the others.

"Sebastian, you must choose a maiden today as Queen." said his Mother.

The King groaned in frustration, tired of all this rejection.

"Son this is just marriage, not a political election!"

They bickered for hours, about how the prince was being unreasonable.

how the rule of marriage seemed very much so feasiable.

The king and queen didn't understand what was going on with their royal son.

Every girl was beautiful, but he wasnt instrested in any, not even one!

Sebastian stormed away, not leaving a word.

The king yelled and cursed at him, the prince walked as if he hadn't heard.

"I don't want a woman to marry, for they are not for me,

my father is ignorant about who I am to be."

The prince paced back and fourth, insults through his mouth.

You could say the prince is scared, stubborn or timid as a dove.

But the truth is, the young man is already in love.

He leans against the window, staring at the night.

Wondering if his actions were called for, was he right?

Arranged marriage made him shake, shiver and sigh.

For his entire life, he has been living a lie.

The prince jumps as a branch cracks, his balcony gleaming in the light

He looks all around it, but not a soul in sight.

He doesnt realize his lover is down in the garden, on the grass, do you see?

Standing gracefully, whispering "It's only me!"

"If my parents see you I'm for sure going to die."

His lovers chuckles over his words, climbing on the vines.

Sebastian hugs his man, arms as firm as trees.

His runs his fingers through his brown hair, layered flat like leaves.

The stubble on his face brushed against the prince's soft neck.

"I came by to tell you, you cannot marry yet,

what about us together, you cant't be with someone you've just met!

Though our love is forbidden, I'll rot in the dungeon with molded dew.

You can't leave me for the rules, because.... I really love you."

His lover choked on his words. Sebastian's eyes filled with tears.

"I wouldn't leave for anyone, not for a million years,

and if it takes running away from this plcae, than that's what I'll do,

No one will know where we ran off to, they won't have a clue."

Sebastian dropped down, running with his lover all the way.

They had to leave the monarch, he would be beheaded for being gay.

The two walked the land, holding hands all the way through.

I hope they find a place where they can be treated equal.... don't you?