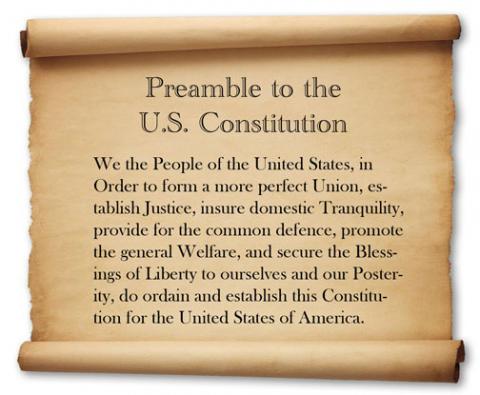 In order to form a more perfect Union:

Establish a system of injustice-

a system of slavery that will never be outlawed

of democracy that enables representatives

to put their needs before the people's

of education that leaves countless children behind

of prisons that become their home when they graduate-

Insure the illusion of domestic tranquility and equality

of a dream that is attainable and not deferred,

Provide innocent lives and a bottomless budget for the common defense,

Promote the general welfare of those who are not enslaved by this Union,

or being shot dead in the street by someone who was supposed to protect the people- Baltimore, Charlotte, Ferguson, Staten Island, Chicago, ...Falcon Heights, ...Fresno, ...El Cajon, ...Tulsa

Do ordain and establish this Constitution

That begins with we the people,

Being an American will involve convincing the Union-

That we ARE the people

America Civil Rights the preamble of the constitution