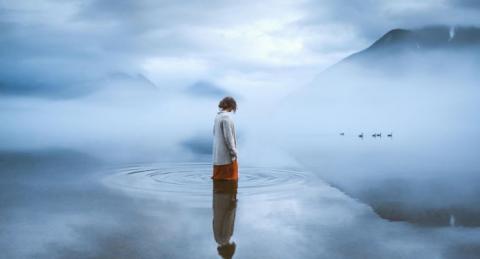 These words, when assigned to one human being, banish the rest to a mediocre Tartarus,

an abyss of ever-changing features; of pale, faceless forms who know the alternatives well:

We are not flawless in appearance, and to claim so is ludicrous.

To claim so flies in the face of thousands of years of human history,

for the standard of beauty changes with culture, and culture changes as quickly

as a descending fog

that shrouds the world in secrecy:

in muffled whispers and echoing footsteps.

An adventurer traverses a sloping glacier. While she climbs, aided by an ice axe,

massive sheets tumble into the ocean,

Never again will anyone behold such a sight.

We are not flawless in appearance, but in character.

I am flawless in persistence. Like the old man who towed a marlin back to shore,

I heave an anchor of trials and tribulations. No, I am the anchor.

Every barnacle is a poetry slam, a scholarship contest, a novel that failed

to attract much attention.

When the anchor returns to port, and is stripped of these creatures,

I am all that remains.

But every morning, when the boat flees the shore, the anchor still accompanies it:

to seek, to succeed, to fail, and,