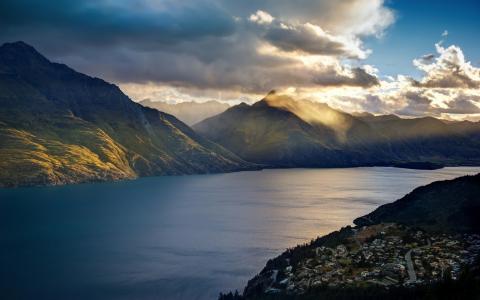 At the beginning everything seemed so clear, picture perfect.

It all made sense, the reason why we meet.
You even promised to stay with me by my side "forever" that was the key word,
I won't lie I believed you.  I held on so tight that the next day,

I wanted to make sure I was there still in the present & the future.
Although, sometimes I purposely appeared to haunt you
Yes, I feared that you would leave me behind.

I am an "Old Memory" and like a wave I was tossed.

The wind was slowly helping out.

Quickly falling out of the boat, I could not sail anymore

I kept getting up but was slowly thrown down.

More and more approach from left to right.

I tried to be strong, and held on

I couldn’t keep up with you.

I was tossed, forgotten and slowly became an "old memory."  Time, my worst enemy!

*Summary* an old memory is slowly forgotten and quickly left in the past and sometimes painfully never picked up (as we learn from our mistakes). The old memory appears back only to haunt the present. Time is an old memory's worse enemy because no matter how much time goes by our past mistakes become part of an old memory. Time on this poem represents God.  He never changes. He is the same today, tomorrow and always.  As times goes by He is constantly present in our lives, even when we depart from His presence. After all, He is our creator; the maker of Heaven & Earth.

Poetry Slam:
It's All Up to You (CLOSED)
Guide that inspired this poem:
6 Tips for Writing a Poem About Memories

these images does a great job in reflecting your poem

i can feel the words as you wrote, perhaps even better if you recited this at an open mic event