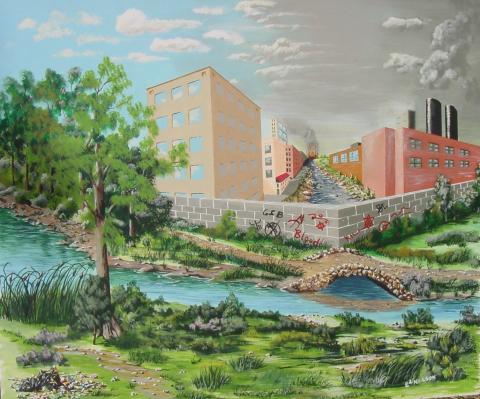 And here is all we have.

They have no choice.

And here is all they have.

We fill our world with toxins, but it’s their world too, and

If we’re being honest, who was here first,

Because it sure as hell wasn’t us.

We came along later

And had the audacity and arrogance

Because we have increased cognitive ability

We have an increased obligation to be assholes.

We took it upon ourselves to play god

Out of carbon and car exhaust.

With our fossil fuels and fertilizers.

I don't eat mean, I recycle, and I rarely drive,

And my parents ask me when I’m gonna give this up.

As if it’s a problem that will just disappear when I stop caring about it.

As if the difference that one person can make is not significant.

Humans are not the only beings in the world.

We’re not even the most important.

The Earth has turned without us for billions of years

And it will continue to turn once we’re gone.

We have been taught for so long that

I is for Industrialization, more technology more quickly.

I is for Independence, every man for himself.

I is for Impressive, bigger buildings in growing cities.

But all of our actions have equal and opposite reactions,

And we’re sending the wrong message.

A message of progress without thought of consequences,

Of development without attention to impact,

Of human elevation without consideration for earth’s degradation.

I is for Iguanas, an integral part of the Amazon food web.

I is for Ivy that grows on city walls, replenishing oxygen in the atmosphere.

I is for Ice that holds 68% of the world’s fresh water, protecting it from the salt.

I is for Interdependence, Interaction, Involvement.

I is for many things, but there is one thing for which it can never be.

I is not for Island.