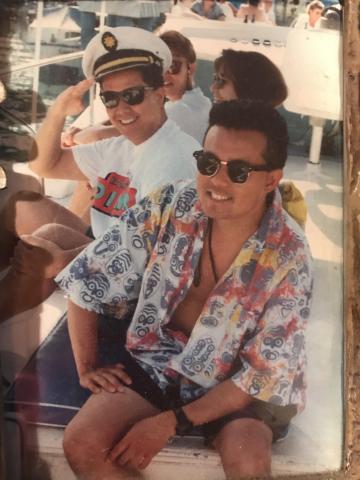 Words left behind that act as marks of your memory

Answer back, I may not last, please come back to me

Would you hate me for that, love me, cry, or call me a disgrace

Erase my name from your mind, a mistake turned into white space

Redraw me to your liking, erase me again, until I don’t resemble my dad’s base

Because you were more than just my dad’s best friend, he had even given you the grace

To be my uncle and my godfather, that was your intended place

But I don’t even remember you

But you died, before I could even write

My name and it was premature, it was like you didn’t even try to fight

The pain, and I’m mature enough now to know it probably wasn’t light

But god freaking damnit I wish you could have gotten right

Excuse my language but I’m not going to lie

What you did was extremely fucked up and really dry

You know you made my daddy fucking cry

You know the one where you’re all at some paradise in Mexico, sitting at a bar

Thinking about you uncle is a hard thing to try

Cus I write now uncle, I want to be an author in this life

Because Uncle sometimes all I want is to fly away

Like you once did during that lonely day in May

But I won’t because you helped pave the way

But I don’t hold it against you

Sometimes Uncle I wonder why you chose to die

Why you left your own mother and made her cry

But I understand now sometimes we succumb to vice

And though I don’t entirely agree with your actions

I still like to imagine you as my strong shining knight

When the day comes when all of this doesn’t bite

And I actually get to recognize your face Uncle when we meet in paradise.

Poetry Slam:
Life in a Letter Scholarship Slam — CLOSED
This poem is about:
Me
My family
Our world
Poetry Terms Demonstrated:
Rhyme Scheme