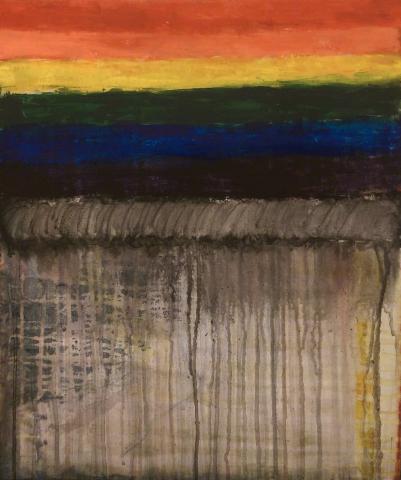 “You’ll have no trouble getting into college now,”

She said, fixing the collar on my white dress shirt,

With her voice like chains dragged through gravel and dirt.

Because I couldn’t see it. Nor could Mom. No one could.

I was the same person I was before it happened,

Before I became that “minority,” back when I was good.

But that didn’t stop me from going to see the bishop,

And asking him, begging him, imploring him,

“Please, is there a way to cure this?”

As if it were some terrible disease needing medicine.

But he said no, because it was an affliction of the body.

And not of the soul, which could manage to escape hell,

If its owner didn’t screw up by kissing a guy or anything,

Terrible and sinful like that, if everything went well.

And later I got drunk on hubris and minute traces of aconite,

And reluctantly told my Baptist friend, the racist, all about it,

And waited for his words to come back to prune away my sin.

But the first thing he said to me caught me off guard,

“So, what do you think of black men?” without the tact,

And I could only sit there and wonder how important,

Colors had to be to him to say something like that.

I didn’t know. I was a virgin in every sense of the word,

To race and to sex and to love, all that stuff,

And later my friend said “Yeah, I might be a minority,

If it was the right guy and I got drunk enough.”

One of the first people I told about it was a militant,

I guess you could say, a true warrior at heart,

And she said “You hate my people!”, the minority kind,So I went to her locker and began at the start.

I told her how I was actually a minority, now,

Which is the fancy word for “freak” where I’m from,

And she laughed because she thought I was the last person to be that,

A good Christian boy from America, the Lord is come.

In church I was sitting in a small room with five other people,

Listening to an old Christian man tell us about God’s will.

“The minority movement is selfish; it’s all about me, me, me!”

I wanted to vomit like I’d been forced to take some stupid pill.

There’s nothing really I can do about it. I’m stuck,

Some huge minority baby pretending to be a grown-up,

Still fighting off messengers from angels both fallen and not,

After all this time, waiting for someone to take this cup.

I’m an anomaly, a biological malfunction,

A kind of specimen, an agent of unnatural selection,

Whose mere existence seems to cry out in vibrations,

“Study me! Study me!” and tear me into sections.

I’m here inside this fishbowl for minorities,

Pounding relentlessly at the glass with these others,

These other minorities, staring at those strangers looking in,

Those whose breath of anxious inquiry only smothers.

But now, I’m this certain type of minority, and I guess,

That gives me some sort of power over other people.

Now I’m a voice to the multitude, an apparatus,

A loudspeaker, yelling, screaming like those bent at the steeple.

It seems I can point with impunity at other people,

I can call them out and yell “Prejudice!” at them,

With no consequence except a possible bout of violent oppression,

And a few stones thrown at me that crack into gems.

I drag behind me this rainbow cape, with letters.

MC, and they stand for Minority Crusader, that word,

Because now that’s what I am, the remnant of my identity,

Never student or writer or friend or subject preferred.

I guess that’s the best I can ask for. A villain, inhuman.

To be one in this current century, to eschew my inferiority,

To help others into the fold, to protect, defend, validate,

To be one with the chains of the untitled: Minority.

Poetry Slam:
I Am... Scholarship Slam - CLOSED
This poem is about:
Me
My community
Our world
Poetry Terms Demonstrated:
Stanza