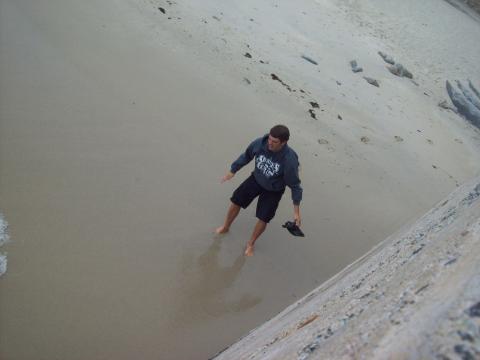 Another sad story about a high school love,
I bet that’s what you’re all thinking of.
But ask anyone who’s known this feeling before,
And you’d understand why it’s necessary to be such a bore.
No one becomes an artist unless they have to.
And you never think it’ll happen to you.

I met you on a basketball court.
I thought you were annoying with your rude retorts.
The tall boy with the curly dark hair-
If you’d asked me then
“Never in a million years!!” I’d swear.

You dated my then best friend,
Who broke up with you cause she figured out she’s lesbian.
You were heartbroken, at least I think,
But recovered enough to date a girl named Kayla Finks
Over the summer
Til your mom found out- what a bummer.

In the meantime we became better and better friends
With each other and each other’s friends
And with them,
Started a Facebook group called “Sweet Action.”

You made me laugh with your Boondock Saints memory,
And when I turned down a date with you to the fair before you’d even asked me.
You told me you liked my hair down, and not in a bun,
During those ooVoo and Skype guitar lessons, which were pretty fun.
And don’t forget our almost first kiss on tower three
In Laser Quest on New Year’s Eve.
Our first date with your mom and grandma to see Les Mis,
Now that was our real first kiss.
You kissed like those gaping open-mouth fish
Circling at the Monterrey Bay aquarium,
I didn’t say that to you, but when my friends asked that’s what I told ‘em.
Working the snackbar on cold January nights,
Listening to your side of the story when you and your mom got in fights,
When you said I looked hot in a skirt and tights,
Smiles glowing so bright even after we turned out the lights-

I could go on and on-
365 plus days times twenty-four hours of memories,
On repeat for infinity

At first I didn’t want to talk about how it ended
Until all my friends made it clear that they did
And I got addicted to all the attention
And calling you out,
Making you the bad guy
But I didn’t even know what I was talking about-
You never really explained why,
At least it didn’t even seem like you tried.

I don’t like to talk about who you are now,
I still don’t understand how
It still doesn’t feel real all of the time
I’m the investigator on a cold, closed, crime.
If everyone knew all the facts like I do,
Maybe they’d agree with me too.
But everyone isn’t important; this is about me & you.

Your company may be what I miss the most,
But for now I at least have you as a ghost
Walking through the bookshelves in the library with you trailing behind
Grazing fingers on the book’s spines at the same time as mine:
Ender’s Game of Thrones
1984, The Day My Butt Went Psycho, The Lovely Bones,
I keep looking back with hopes to see you browsing amongst the shelves
But after all, now, I’m by myself.

It doesn’t feel right when other people say my name.
It sounds foreign on their tongues,
The second syllable sounds strange
And infinite as if I’m not their perfect Sarah anymore,
But for you I was exactly what you were looking for-
Or so I thought.

I can hear you laughing in my head
When the lights are out and I’m in bed
Heart breaking with the TV on,
The Phantom of the Opera singing our song.
I feel your fingers on my waist,
Your smile against my face,
Toes kissing
Knees knocking
Your nose in my hair
It really isn’t fair
You’re still here and I’m not there
I’m disintegrating and you don’t care

I guess it’s just another one of those nights
Where I’m choking back dinner and starting fights
With my parents
Cause I can’t keep it straight in my head
I’m so transparent
Can’t they see that I’m as good as dead?
Can’t I be somebody else instead?
Anyone but me
Because I’m drowning in tears
Yet trying not to be
Since I’m only seventeen
And everyone expects me to be
Happy and carefree

Valedictorian
Berkeley bound, first violin,
Rookie of the year on the cross country team and swim,
A million other titles
But they’re worthless to me without him
Call me stupid, call me crazy, call me whatever you like
But he was the one who taught me how to ride a bike
And how to love myself,
How to live to my life.

I hope the current you isn’t listening because you don’t deserve this stupid poem,

But this is the lighthouse beam for the old you,
if ever he wants to point his sails back home.