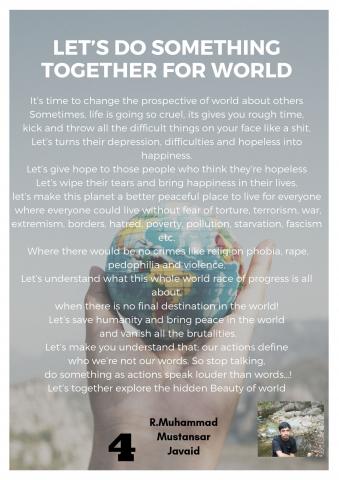 It’s time to change the prospective of world about others

Sometimes, life is going so cruel, its gives you rough time,

kick and throw all the difficult things on your face like a shit.

Let’s turns their depression, difficulties and hopeless into happiness.

Let’s wipe their tears and bring happiness in their lives.

where everyone could live without fear of torture, terrorism, war,

Where there would be no crimes like religion phobia, rape, pedophilia and violence.

Let’s understand what this whole world race of progress is all about,

when there is no final destination in the world!

Let’s save humanity and bring peace in the world

and vanish all the brutalities.

Let’s make you understand that; our actions define

who we’re not our words. So stop talking,

do something as actions speak louder than words...!

Let’s together explore the hidden Beauty of world