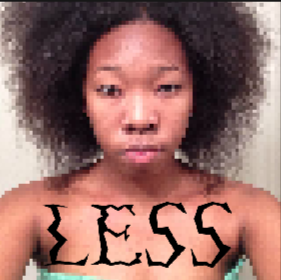 Fluid and emotionless I stand

Less that I am

Less than my peers in all subjects from calculus to chem

Less than my friends

with their bone straight golden locks and flawless pale skin

Yes, for some reason my kinks and coils that won’t be tamed aren’t allowed in your definition of beauty so I chemically straighten them

Less than my foes because I don’t own as much

Because daddy bought them a new Porsche for their 18th that rides so smooth, and speeds so fast, and just like that all the cash they acquire won’t last past their 19th if God forbid they play russian roulette with their lives and get into a drunken crash

and yet I’m less

Less than the elites that paid their way into my school, who pave the way for their younger brothers and sisters, leaving them trust funds in their wake

Take less, turn left, because nothing in this picture seems right

Someone that I can’t identify with

I don’t even know why I keep waiting for proper representation when this country has only told us for centuries, “nigger, you are less

Less and inferior and ignorant and dirt

Dirty and filthy, you’re the scum of the earth

The world would be such a magnificent place if we could somehow get rid of you nigger, somehow just have less

Why are you still trying?

Haven’t we told you enough?

But how? How am I less? I’m only doing my best.

and no matter how hard I try to compensate for the things that make me less than, it amounts to nothing

I stopped thinking less of my abilities in a lecture hall or a chem lab because as I look around, I don’t see any skin tones that even resemble pigmentation close to mine

I deserve to be in that classroom just as much, if not more than others

I have strength and tenacity buried in these thick roots and for the sake of my sanity, I’m cutting the straightened hair off to embrace the person I was made to be

I stopped thinking less of my family’s situation because for us, money doesn’t grow on trees

Less than the what the maker of this world created within

I am and have always been flawless

Yeah, I was never less

And as much as you would like me to believe so, I could care less

Because for me, trying to please society’s standards and create something that’s worth their attention, their acceptance, their appreciation is pointless