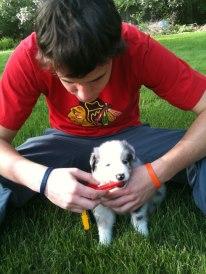 WHEN CHAMPIONS ARE MADE

Its' the dead of winter

It's January, February, and March

That;s when it counts,

Where you become faster and stronger

This is when dedication turns to starting time

It's the grueling back to back sprints

The players finish, kneeling down,

hunched over, puke spewing out

That's where your toughness shows

The sun over the horizon coming through houses

Lunch in a cold room, so refreshing

The scuffle of feet sprinting

You dont whine, and you dont complain

You do it to get better.

WHY AMERICA LOVES FRIDAY NIGHTS AND YOU HATE SATURDAY MORNINGS

Dusk is upon them, game day lights on

A new season filled with hope

It's facing adversity, and winning

An Earned "W" with bruises all over cuts on the hands

It's one and done week in and week out

Five wins to glory and one loss to shame

When waking up early on Saturday is a good thing

It's a short 157 mile trip to Champaign Illinois.

This is why you did all these workouts

But all hope is gone as the last second ticks

A teardrop falls from ones eyes in sadness

Its all over now their final game of their career

A crushing end to it all, but I'M thankful,

Thankful that I'm a better person than I used to be.

Poetry Slam:
Why I Write Scholarship (CLOSED)
Guide that inspired this poem:
6 Tips for Writing a Poem About Memories