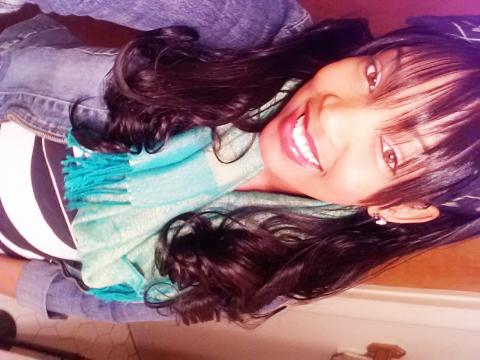 I want to start off by saying its hard being a

People have no idea

Unless you are one,

Then you know my pain

The number one rule

According to my mom is

“It’s all about the hookup”

That means you need to dress for your

Dress for you because it makes you happy

I love my high heels

[But my cheetah boots are my favorite]

They make my legs look endless

Until it reaches my “apple bottom”

They help me sit and stand up straight

And Carmen and Electra have a good time

But after a long day

9 + hours walking in them

They leave my feet aching

However, I did look good though

A made up face is how I usually leave the room

And sparkles on my eyes

I think Rihanna was singing about girls like me

But beauty has its price

And I’ve paid my debt

In my adolescence years

I used to say

“I don’t care what people think when they see me”

I gave into peer pressure

Desperate to fit in with both the

Trying to avoid all stereotypes

Criticized by the Blacks

Because I was “so proper”

And I was labeled as one of

The Whites welcomed me with open arms

As long as I didn’t display

I had one of their Aussy men

He saw me when I was invisible

Then I was somewhat accepted among that group of friends

But no one knew what was really up

Because behind closed doors

That never came to light until

The end of a weak era

Where I let an abusive tyrant run

Desperate to be thinner

My finger, toothbrush, and straws

Abused the use of diet pills

Because my tyrant and society to me that

I had shed quite a bit of weight

For the next two years of life,

Kept going back and forth

To what I thought was love

With my sexy abusive prince

Then finally I had to walk away

But let’s fast forward to now

So where are we now?

Well, here are some things that I just

When people see me

They automatically make assumptions about me

I didn’t really recognize the racism that existed

Maybe I did but I really did not want to

But going to a Predominately White School

Opened my eyes to a whole new world

I couldn’t walk into the 711 without being watched carefully

Freshmen year, I swore up and down that I entered was Klan Country

Being the token person of color in every class was

Something I had to get use too

People had made assumptions that I was from a DC Hood

My pretty girl swag that caught the eye of students, faculty, and staff

Getting into this womanly confidence

You want to know something?

Here’s the true confession of a colored girly-girl

I cannot rely on just my looks to get me by

But I’m not White, Blonde, Tall and Skinny

Just because I gave one good performance

Doesn’t mean I’m talented based off of that

Because of the copper skin tone

The people of the world expect me to play a role

Not just any role

But Mammie, Sapphire, or Jezebel

When I’m helping with events

Because I am making sure everyone is okay

And have everything that they need

The homemaker and housewife

My only purpose is to serve my guests

I never talk back

But I’m a slave to my own home

Hoping for a way out

If I am speaking loudly or challenging someone

Because I’ve got bass in my voice

And I challenge or call you on something

But wants to make sure that my point is heard

Sapphire is about business and making sure her money is straight

You consider her to be rude and a bitch

Because Sapphire is a woman,

But if she had a penis,

She would then be “HE” and labeled as “The Man”

Everyone aspires to be

And I want to show some skin

So I throw on a skin tight dress

That accentuates my curves

Strap on a pair of stilettos

Holding my curls with spritz

Scented with Coco Chanel No. 5

When you see me,

I may be that girl from a wild fantasy

Where I may have satisfied your hormones

While on a ride of pure ecstasy

When it comes to relationships

Men want to you be a lot of Mammie

And cater to them

Be Jezebel when it’s time to pleasure a certain stick

But most of them think she needs to be hidden

I’m seen as all three of these women

Because that is what society has told people

That these are the only type of black women

But I’m a Strong Black Woman

“We don’t always do what we want to do, but we do what we have to do in order to survive”

It’s a game of survival everyday

When you’re a student of color

Doors are being shut

You want me to spread my wings like Ernie

Then you wonder why I barely walk into the offices

Or why I barely speak

So let me introduce you to the woman that you see.

You to a woman who was had been torn down

And had to build herself back up

A woman who put her faith in the physical man

Instead of the one who sits up high

A woman who believed that she needed

A man  and people to complete her

To a woman who keeps smiling

Through all the pain and suffering

A woman that cares more about other people

To a woman that wouldn’t let people

Hear her cry for help

To the woman that you see

Stand before you today

So let me take a moment to introduce myself

Hello, you may not know me

But let me make my presence known

I’m not Lyte as a Rock

And I don’t go chasing waterfalls

I am the woman that your folks hope you someday meet

I’m a woman who likes to be in control

And relinquishing that power

I’m that woman that knows what she wants

And I am not afraid or ashamed to say so

I rarely hold my tongue

And not say what’s on my mind

Because if I do,

Who will speak up?

I am T.C. Heard to be exact

And I will forever let it be known

Now I’m gonna get you hip to my flow

I refuse to let any man or woman

Think that they can control me

I don’t serve you

You didn’t die for my sins

don’t need you, you, you

Or validate the fact that I’m beautiful

So when you tell me

That I am, don’t get mad or catch an attitude

When I reply with “Thank you, I know.”

‘Cause honey, let me tell you

If I could, I would hang mirrors

All around my room

Just to bask in the greatness of my beloved gift

That I’ve been graced with

Don’t get me wrong,

And trust me, I don’t pretend to be

Sometimes, I want to lose a pound... or two… maybe even a few

My grandmamma told me

“Honey, you just gotta work with whatcha got!”

So I say again,

My name is T.C. Heard

I let it be known

I just wanted you to get hip to my flow

Just so you know,

Think before you speak

About the false judgments

You may have about me