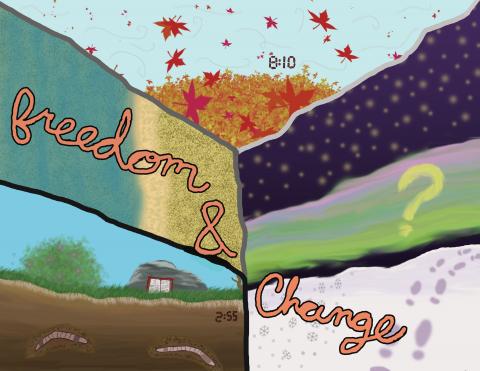 Inspiration is a dry concept.

You ask what me inspires me, but what if I don’t know?

What if my life is just full of fear and doubt?

Inspiration is hard to put into words.

When I speak unrehearsed,

I lose what I’m trying to say.

I make jokes that fall short, laughter from my peers seems to be out of reach.

I don’t attract any infatuates, only lonely boys that like to make fun.

That’s what my day to day life is, so where can inspiration come from?

Am I supposed to find it in the boy from art class?

The one who only ever laughs at my plans for the future?

Or from my seat partner in science class?

Who crowds my space and laughs at my mediocrity?

Inspiration for me doesn’t come from these other people.

As an introvert, I tend to avoid other people when I can.

As a teenage girl, I can’t even rely on a steadfast mentality -

I change my mind at least five times a day.

People are dying and the world’s on fire and glaciers are drowning.

Everyone in this world is giving up on the paradise we always wished we find.

Now isn’t that a shame?

Does it hurt when a friend deprecates themself?

Isn’t it hard to watch the news when all the silver linings are gray?

People frown, but instead of trying to cheer them up, we join them

Because the world is in agreement.

Inspiration is a dry concept,

And we’d much rather quench ourselves on vices.

Because what’s the point of inspiration in a world like this?

This is the world we live in, and it will be devoid of inspiration for a long time.

Unless I change their minds.

In a world without inspiration, I have no choice but to become what’s missing.

You ask me what inspires me, and I’m sure I have a real answer,

But since it was late to come to mind, I have no choice but to tell of something different.

In a world where my inspiration seems lost, other choices can be made.

I could choose to burn with the rest of the world,

But I’d rather pull others from the smoke.

I’d rather turn scowls into smiles.

I’d rather turn people’s days around.

I’d rather become inspiration for others.

So that, when they’re asked, “What is something that inspires you?”

They’ll have an answer.

They’ll be kind and good and desperate for the world to change.

A future where people smile everyday.

A future where the world is full of inspiration.

A world where someone’s first reaction,

When asked what inspires her, is not,

“Inspiration is a dry concept.”

Poetry Slam:
Desire to Inspire Scholarship Slam — CLOSED
This poem is about:
Me
Our world