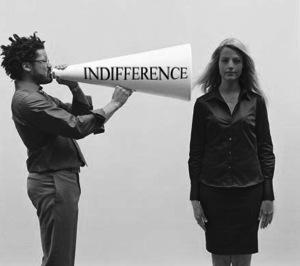 Indifference blinds my generation with ignorance, it’s a lack of concern, of attention and lack of interest, for other people, for life, and for God in every sense. God calls out to them, but they refuse to listen, they could care less about the troubles of the world and all that is wicked, it’s all about self love and giving into the flesh, but what’s the underlying reason, I start to question this, it’s not lack of motivation, or lack of knowledge for what’s out there, for you see there is a difference, in order to be indifferent you must be aware, and still not care, it seems that something’s really wrong, something’s just not right here.

Because we put ourselves first and fall slaves to self love and greed, we start to say screw the world it’s all about me, you say I’m doing me now as your flesh you feed, falling short of God’s glory, your testimony becomes weak, til you reach your peak of sinfulness ways, your me-ness begins to move up the chain, but meaningless is the rise to self fame, when your concern for the world goes up in flames, for you were not made to toot your own horn or be a cheerleader at your own game, but instead for His pleasure you were made, and He will not accommodate, into the cramped space between the page, of the bible that you only pick up for the service every Sunday, and then you wonder why it all goes wrong in this life that your living, asking God to make a difference, when it’s you who doesn’t want commitment, you want him to bless you and give you forgiveness, yet you refuse to walk away from wickedness, running around thinking your invincible and limitless, while death knocks at your door with a paycheck for your sinfulness.

Because we get ignorant when we train our eyes to see only what we wanna see, and we focus our vision on everything we wanna be, we start to see only whats good, failing to notice iniquity, failing to speak up when we see or hear something wrong, and we even get indifferent listening to these songs, I guess it’s ok for jay z to say Jesus can’t save as long as there’s a catchy beat to which we can sing along, and I wish I was wrong, but this generation has let things slide for too long, have we become mindless puppets that the media can string along, or are we the body of Christ still standing strong.
Last time I checked God doesn’t like lukewarm, so how is it we dabble a little here a little there, trying to get the best of both worlds, yet we are not of this world and its confirmed by the word, but it seems our vision is blurred, and we are no longer easily deterred from the ways of this earth, it seems we have conformed, do we no longer fear God? Do our ears not hear God? Is he too old school for us now? Or is the ignorance blasting from our radios just too loud? Have we forgotten how to listen to God’s whisper in our ears? Because his plan has been set before the creation of days, weeks, and years, but it seems that at this height what he needs are volunteers.

He seeks a generation willing to follow him even if the world attacks us with sinfulness and spears, scares us with every kind of fear, tempts us with temporary laughter and cheer. For he seeks a strong people who will follow him through anything and anywhere. But where are those people today? Their ears have filled with nonsense, their eyes are glued to television sets, their mouths have forgotten how to bless, their minds are filled with ignorance, and their hearts are lifted up in arrogance. But who will rise up and put a stop to this, when our biggest problem is… indifference?