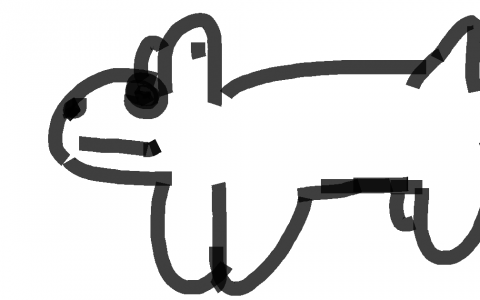 I am Sebastian Batista. I am Dominican, came to the US when I was 12, 6th grade.

Uncertainty, everyone's faced it. How often though?

Most people can probably recall a few times, and that's okay. Life itself is uncertain, but it depends on how it scales.

People are scared of the unknown, like when you drop your keys somewhere behind a dusty abyss were you imagine 1000 cockroaches waiting.

Uncertainty adds up. The more things you don't know about, the more scared you become...so for me.

I'm fucking terrified. So let's tally it up:

I came into a foreign country when I was young.

I didn't know the language.

I didn't know how to ask questions.

I didn't know anyone there.

I got diagnosed with Aspergers.

I didn't know if I would ever see my family ever again.

I'm an immigrant and not knowing when I'll get my papers.

My mom has to work arduous cleaning jobs that barely pay.

I couldn't even watch TV in peace and GODDAMMIT I dropped my keys under an old dusty pantry and I'm not sticking my hand up in there!

and imagine...that's just how things were when I got there.

Graduating from Boston Arts Academy, a school where you need to audition to enter.

Auditioned for Berklee College of Music, tough school to get into (globally),

but then there's still the fact that I'm an immigrant...and broke.

I had just moved to a new home after my mother divorced.

My mom has chronic pains all over her body for the rest of her life.

I get out of school late so I can't work and get money.

My mom only speaks Spanish, so I had to do the college application process by myself.

I feel so overwhelmed that applying for scholarships makes my head spin and I'm running out of time...

Through all of this Uncertainty, there were only two things pushing me forward, myself and my mom.

THEN try dealing with yourself.

The day's become a blur of procrastination,

You beat yourself up and isolate yourself,

YOU ARE A MESS.

and your mother has tried to pull you out of that mess, but she's done enough it is up to YOU.

My dream is to become a Music Producer, for others and for myself.

My mother has done all she could, so in those deep dark moments, there's only me.

Living with a dream and acting like a fool...

I was told it was harder for me to socialize,

I immigrated to this country,

I'm pursuing music as a career,

But I have no money to pay it,

and I've been dilly-dallying for way too long.

So after all that, all I have is my dream. I've hit rock bottom before.

So the bright side is the only way is up,

I may not have money, but there's still time,

I may not have much but I have my dreams, and my family's expectations to uphold.

So why the FUCK would I stop? When I still have hope!

I didn't come here to give up.  and I haven't got far enough!

I have so many things I haven’t shared with the world!

And my ULTIMATE GOAL is to come out on top and inspire people like me.

The underdogs in life, with whatever they’re going through.

I’ve been called awkward for being so socially disconnected, and I believed them once!

I’ve been called annoying for trying so hard to be happy, and I believed them once!

I’ve been called broke for not having the best shoes or clothes!

I’ve been called a nerd for focusing so hard on my studies!

I’ve been called stupid for making mistakes more times than you can count!

I’ve been made fun of for my height, ethnicity, accent, and even for trying to be nice!

I’ve been manipulated for showing kindness!

And I’ve been beaten for trying to stand up for myself!

But I’m Stubborn as fuck and I said:

I’m going to be myself!

I’m going to appreciate what I have!

I’m going to keep working to make my mother proud!

I have come this far from making thousands of mistakes!

and I love myself!

Because it doesn’t matter what they say! They’re not the ones that made it to Berklee! I did because it’s my future!

They’re not the ones fighting life! They’re the ones complaining about it!

And even though I have not made the best life decisions, never did I once stop fighting.

Life is uncertain, my problems are not solved, but I am not finished!

Though I am uncertain, I am a dreamer!

Poetry Slam:
Glow-Up, Grow Up Scholarship Slam — CLOSED
This poem is about:
Me
My family
My country
Our world
Guide that inspired this poem:
Write about a current event that matters to you.