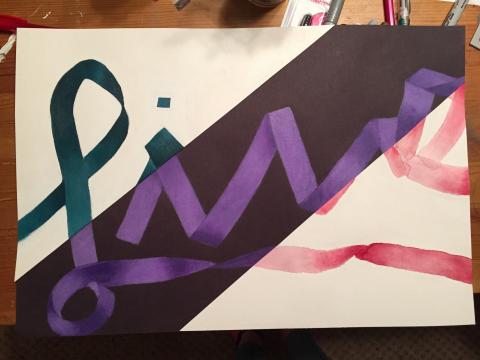 2016 wasn't a rollercoaster, or a carousel, or a blind leap off of a cliff like they everyone says.

This year was an ocean.

The year I was born, we started the drive.

We took an adventurous path, one filled with winding roads and the greenest of grass.

It's sort of hard to remember it all, because on the drive it all blends together.

In the van, packed together with my family, it wasn't about the adventure;

it was about the destination.

When I turned twelve or so we finally arrived:

I could see everything; I saw the vast blue stretching out as far as I could see,

so far I had no idea where it ended.

I raced across the sand, my feet burning from the heat

and the grains getting stuck in between my little toes.

All I wanted to do in that moment was reach the ocean,

but I had no idea what I would do when I got there.

or if I would walk in, gracefully, just to see how far I would go.

What I wasn't prepared for were the people.

There were people, right there, where I wanted to go.

The path that I had planned to take was blocked;

suddenly I discovered there were people and objects that would stop me from following this dream.

until I looked underneath the blue surface to see what was underneath.

I let the waves lick my heels before trying to pull me in deeper;

but I wouldn't let it.

I stayed planted firmly on the shore, refusing to go any further until I was ready

for all the things the ocean had to offer me.

In 2014 I waded in until my stomach was underwater.

I couldn't feel the pull of the waves anymore, and I had no idea what direction

my life was trying to take me in.

I refused to look into the water yet; I remained above the surface.

I had no idea what opportunities and adventures lay beneath the sea,

and I found many joys life would offer me

but many pitfalls, too.

I found many beautiful fish I could never catch

and many painful jellyfish and crabs determined to harm me

and stop me from continuing on this path.

But I had the desire to wade out until my feet couldn't touch the sand anymore.

that I couldn't see. I had no idea what lay down there, and I didn't plan to find out yet.

Nearing the end of the year, I let myself tread out into uncharted waters.

I looked down, and all I saw was darkness.

I didn't know if underneath lay a world of happiness and prosperity,

before I got the chance to touch the surface again.

This year, I took the chance I had been so afraid of taking;

I may not have known what lay within all the blackness,

or if I would encounter the most poisonous of jellyfish.

What I discovered were dolphins, and sharks,

and all of the creatures I had never seen before.

I began to understand myself, and learned why I'd gone on the adventure in the first place.

The ocean is different for everyone.

For some, the ocean is to enjoy.

The ocean is to play on the surface with beach balls, to have fun in the sand and the shallow water.

For others, the ocean is to explore.

It's to see just how deep you can go and survive,

and to see how much you can learn along the way.

2016 taught me that the ocean is for swimming.

It's for discovery, for diving and for learning.

And you won't get very much out of it if you don't see how deep you can go.

This year, I let myself experience a bit of what the ocean had to offer.

Poetry Slam:
My Year in Poetry Scholarship Slam - CLOSED
This poem is about:
Me
Our world
Poetry Terms Demonstrated:
Imagery