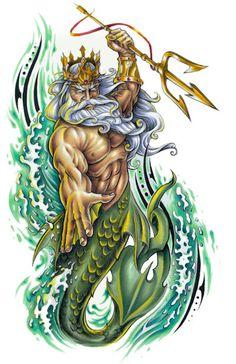 Here I am, king of the sea

However true now, it wasn't always me

My father once ruled over these waters

He looked after me, and his five daughters

One daughter stood out among the rest

At magic and spell-casting, she was the best

Father had her lined up to be the next in power

Lurking, she was, at the edge of the surface

A place where no merman nor mermaid served purpose

My sister's heart filled with such heart and delight

For her, that mere human was love at first sight

She swam back to Father, ever as eager

Begging that somehow, the human could be with her

Father denied gently, he was ever so nice

Because all powerful wishes come at a price

Besides, Father said, humans are no good

They'd catch and eat every merperson, if they only could

My sister heard him clearly, but still did not listen

The fire burning in her heart still brightly glistened

She came to me then, begging for aide

Not caring about the fuss already made

Father's trident held all the power of the sea

In the cold of night, I swam without sound

To the room where Father's great trident was found

I brought it back to my sister, there she was waiting

She took it from my two hands without debating

The trident rose in the air, shimmering and glowing

The sweet taste of victory my sister was showing

She chanted a spell that would make legs appear

However, neither of us had checked if the coast was clear

Our baby sister, barely a hand in age

Wandered in to see to with what she could engage

She did not pay attention to what was facing the tips

The trident blasted its power, although it did miss her

It consumed itself upon our poor younger sister

Her scales disappeared without leaving a clue

An urgent look of need appeared on her face

Without her fish tail, she could no longer breathe

From now on, it was air that she would need

The two of us panicked, unsure of what to do

We seemed to be frozen, as if the water were glue

When Father arrived, it was much too late

The lungs of our younger sister just couldn't wait

Father did weep, for his lost little girl

Then, feelings of anger he did hearl

He lashed at my sister, ending his cry

Screaming it was her fault his baby had died

Redeeming his trident, and despite her desperate plea

He banished her to the darkest corner of the sea

Ruling the waters that she ought to be

Daughters of my own, are alive and growing

But no signs of love they soon will be showing

Not for any human, I refuse to let them be misleaded

For as long as I rule, history will not be repeated