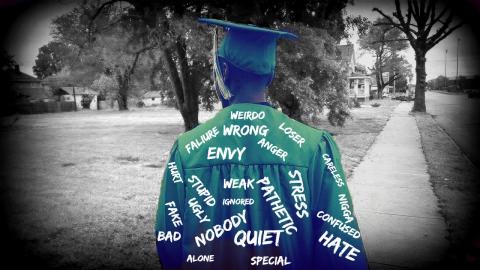 As a young man getting ready to enter the world. And the crowd cheered as the light made my eyes a little blurred. Hard seeing those that actually cared and hard to see those who in my life were never there.

From the family, to the friends, to enemies, to the frenemies. Actually take away the frenemy because I wouldn’t want the demon’s spirits to lure around me. So if I know you’re a temporary, then I wouldn’t want you to be around blessing and cursing me till the cemetery.

But anyways, my family, the blood that’s thicker than water. Been through hell and back because you can FEEL the blood boiling because times got harder. From my blood sisters and my spiritual brothers being attacked from hell under. Yeah, the man under works but doesn’t know we become stronger.

While thy friends been there to support to the end. Some left but you could remember them from life’s lens. Some that shed tears when you were suppose cry so you know it wasn’t pretend. Those friends that feel your vibes, the ones I highly recommend.

My enemies, the man and I that help each other exceed our potentials through jealousy. We were destined by legacies to defy our equities. Forget equality because we were always used to our specialties. To define us from society, mentally and physically.

Those 3, are all those in seating and caps and gowns.

And then there’s me... The one with the heartache and the one that shows that he can bleed. The man that works through pain, and a diagnosed disease. The one man that finally earned his degree.

Yet no one knows his story. But they think he’s the everyday man that they see. But they never met the man that he’s seen in the mirror. But he hopes that one day that as his presence is met with the most high… That they see him more clearer.

Poetry Slam:
You, Me, and Poetry Scholarship Slam - CLOSED
This poem is about:
Me
My family
My community
My country
Our world
Guide that inspired this poem:
Write about a current event that matters to you.
Poetry Terms Demonstrated:
Allusion