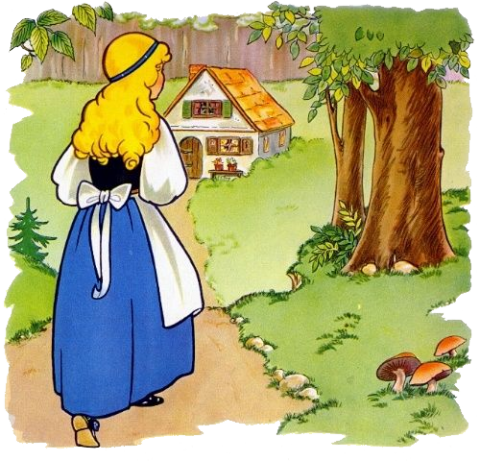 I know if you are reading this right now, you’re just dying to know what truly happened that day.I am also willing to bet that you just ate up what all the fairy tales fed you.If I am correct, I advise that you go to the nearest toilet and start puking out the lies.I admit the part where I was in the forest was completely accurate,But did you not once think why a little girl would be in a forest all alone?No?Well, it's quite simple really, I was running for my life.The previous night was young but that didn’t stop my father from drinking one beer too many.Too young for my father to have already begun his drunken assaults on my mother and me.My mother always took the worst of his beatings.That night his worst took my mother's life. I had stared at her limp body that was never to move again and I bolted.I ran straight into the forest.I crashed and I fell relentlessly due to the darkened skies and the tears that threatened to fall.I ran all through the night and had not dared to look back. When the next day had arrived,I happened upon a quaint house.It was vacant, and I was desperate for shelter.Therefore, I let myself in. Everything within the house came in threes.I tried all of them out to kill time.For I was waiting for the owners of the house to return,In order for them to aid me.Evidently, I fell asleep on the smallest bedOnly to be awakened by the three bears. I explained my situation to them and pleaded for them to help me,But my father had caught up to me with the law enforcements.Just like you were fed the story of Goldilocks and the three bears,My father had conjured up some ludicrous tale, at least to me, that managed to halt any further speculations.Just like you didn't question me being in the woods, nobody seemed to question my mother's untimely death. All I can say is that karma is a wonderful thing that gifts many and curses others.With that being said, my father never changed his ways.He had too many drinks once again,And used me as his personal punching bag.Although this time, he needed to release himself during his rampage.As he walked to the nearby tree, I watched as a big bear approached him from the window.Yes, I could have warned him but I didn't.The sounds of the bear's teeth mauling on my dad and the gurgling sounds he was emitting sounded like poetic justice to my ears.

Once Upon a Time scholarship karma goldilocks and the three bears