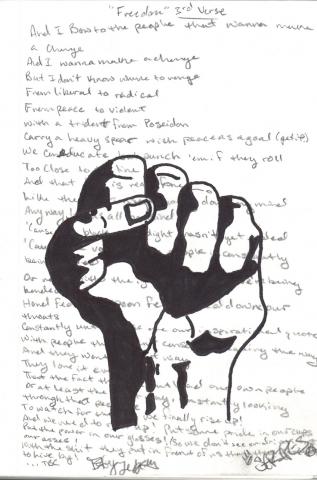 I've seen my people enslaved by these monsters
I haven't seen them escape very far
Still trapped by their masters, or the ones that claim they are
And they've been hypnotized by those damn cars
And the money and the drugs and the lights and the fame
All you hear is negativity buzzin’ around their names
It's time for the revolution!
We need justice, that's the solution!
Count the clock down from 10 to one
When the alarm sounds that's when we'll run
Faster, faster go until we see the sun
And until we GET THAT...
FREEDOM!

I travel the road of the lonely samurai
A Rurouni of sorts watching with my own eyes
The anger and disgust in others that I see
Because my skin isn't the same as these
People who think that they're so pure
And act like compared to us they're the Füher
Or ruler of a nation to try and put us down
Now that's oppression over a race, these racist clowns
You act like ignorance only applies to one people
But I've seen more of them than us ‘cause they don't treat us equal
So don't accuse me of being niggardly
When you're the one hogging all the equality
Count the clock down from 10 to one
When the alarm sounds that's when we'll run
Faster, faster go until we see the sun
And until we GET THAT...
FREEDOM!

And I bow to the people that wanna make a change
And I wanna make a change
But I don't know where to range
From liberal to radical
From peace to violent
With a trident from Poseidon
Carry a heavy spear with peace as a goal
We can educate them all but punch em if they roll
Too close to the line
And that line is really fine
Like the pen I use to write down my mind
Anyway, let us all be kind
‘Cause the black man plight hasn't yet ended
‘Cause the voice of the people is constantly being “rended”
Or rent with the ignorance that we're being handed
Hand fed and spoon fed, forced down our throats
Constantly until those are our inspirational quotes
With people that aren't conscious leading the way
And they want it that way
They love it everyday
That the fact that we can't lead our people
Or at least the right way, constantly lookin’ through that peep hole
To watch for the day we finally rise up!
And we need to rise up, put some pride in our cups!
Put the power in our glasses!
So we don't see or drink out our asses!
With the shit they put in front of us that they want us to live by!
I may not have been born then but I've seen it with my eyes!
They want us to live this type of image that they've placed in front of us!
They want it to go back where we were in the back of the bus!
The ignorance that they’ve envisioned us having!
So they can sit in the back of the room laughing!
Hoping that our society as a whole reaches its demise!
They’re just that evil to put our power at a rapid decline!
They wanna eradicate all of the power that we've made for ourselves!
I won't go back to picking the old books off the shelves!
Count the clock down from 10 to one!
When the alarm sounds that's when we'll run!
Faster, faster go until we see the sun!
And until we GET THAT...
FREEDOM!
AND UNTIL WE GET THAT FREEDOM!
AND UNTIL WE GET THAT FREEDOM!

Guide that inspired this poem:
7 Tips for Writing Poetry on Civil Rights