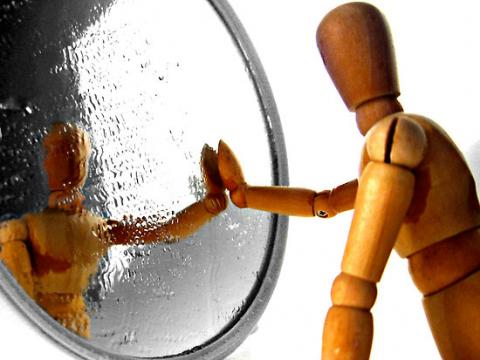 75087
United States
32° 58' 5.7648" N, 96° 27' 39.6" W
See map: Google Maps
75087
United States
32° 58' 5.7648" N, 96° 27' 39.6" W
See map: Google Maps
One look in a glass of observations
melts into the specificity of a face
that gives way to different people, experiences, places
collectively accumulating into this walking jumble
of pure human.
An atom and an atom form a molecule;
molecules and molecules bind to make compounds:
ionic, molecular, covalent.
Different origins, different ways
to amass into one large mass of complexity-
That is the story of humanity.
I'm not mulan, wondering when my reflection
will show who I am, because my reflection refuses
to lie still long enough for me to see it.
It ripples the values of time grouping as circles within
circles, Continuity-that is the reflection in the water.
Death gives way to birth; life isn't always for the living;
Sometimes death isn't so conclusive.
Seems cyclic in nature
always looping in the same consistent circle of life
Maybe that's why we never get it straight
paralyzed in the folds of curves and round edges.
Allow me to explain, if you'll lend an ear and
spare a moment of thought. Though I won't settle
for only one of the two.
Each person is the author of their own story.
There are times when a plot pauses for a brief second
because the protagonist doesn't meet standards
trapped within its own bindings;
it doesn't matter the value written inside or
the words that mimic so many others.
Every person's inner workings is a thesaurus to
another.
Yet books are still judged by the cover
distinguished and shuffled into different genres.
There are times the conflict weighs so
heavy even Atlas has sympathy.
Why Can't We?
Like a computer screen displays one solid image composed,
upon a closer look, of multiple
miniature digitized units.
That is the picture of humanity.
Still there are times when told
UserLog In and Password are plugged incorrectly-
which of the two is it though?
The one the world sees or the one hidden to me?
Sir, if you are the sunset on the horizon then I am
the night sky waiting to trade places.
That is the reflection of me fading into you.
Though there are times a star wrinkles the sky
long and hard searching for its constellation
and still does not merit a smile
but is rewarded with grimaces
no hand extended for a genuine handshake
but rather shakes the foundation morality had
been set upon, greeting, "Hello. I am prejudice.
How may I separate you?"
That's just how it works.
But see, we are fractions of a whole that can be
added together by a common denominator.
Me plus you equals congruency:
if you take the time to compare sides and angles
you'd measure it out to be true.
So you see,
Don't judge me for I am you.
Poetry Slam:
To Be Heard Scholarship Slam -- CLOSED