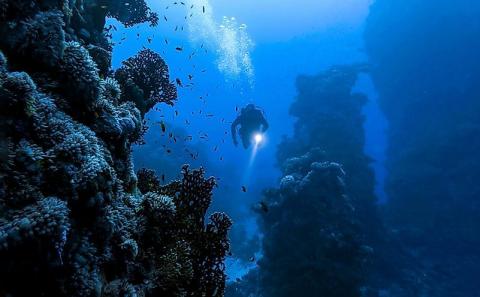 The azure ocean, home to embedded enormous incomprehensible riches of mysteries and riddles,
More than the Mars, lies unfathomed, underneath the conundrum of oceanic colossal rhythms,

From the The Milky Sea Phenomenon, a sight captured as bioluminescence illusion,
The Purple Orb of the ocean floor of California and the Baltic Sea’s anomalous puzzles,
Like the alien spaceship put foot on the colossal quagmires of oceanic chasm!
When the underwater volcanoes erupt to perplex beyond imagination in huddle,
To probe and discern those gems of oyster shell’s luminous pearls dazzles,
Deep beneath sleeping peacefully in the ocean’s cradle!

The fatal enigma of the unplumbed immensely profound oceanic mysteries will never dwindle,
The more one plunges to pierce in deep muse it’s vastness engulfs to diddle!
The superficial waves in corrugation, are mere widening its hitherto horizontal hurdles,
The bizarre sounds emanating from beneath are like giant icebergs scraping the oceanic floor in madly rhythm!
The obscure oceanic realms, its myriads mystical appearances remains timeless, fancy of millions!

Eras and eras pass, the mythical mermaid’s riddle are yet to resolve,
As centuries pass, may replete with the witness of numerous human civilizations!

Like the Atlantis of Japan, from time immemorial, the oceans are abodes of colossal confusions!
The voyages disappear in the Mystic Triangle, who knows what lies beneath the mythical abstractions?
The twirling sounds of infinite ocean swirling in the sea shells are captivating it’s admirers attractions!
The archipelago one after the other vanished without the trace, as in Marina Trench’s aberrations;

As if the Phantom Islet of Bermeja, in its murky abyssal cradle’s compositions!
The Crop Circles discovered beneath its bosom as if the signage of other world’s manifestations,
The ocean phenomenon of green flashes meets the red tides, reveals its magnificent disposition,

Wants to plunge, swim like the mermaid, in its mystical cerulean temporal lilt motion!
Oh, the oceanic conundrum more we try to fathom, the more we entangled in its cryptic chasm!