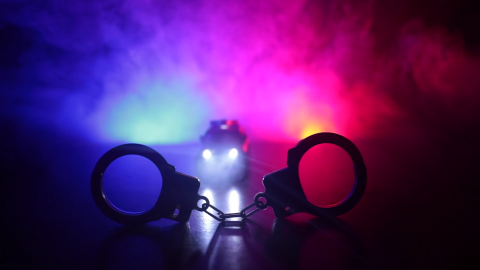 Daylight is consumed by sirens and American themed lights

Cuffs fly around six packed in a Honda, wondering 'Is this a fair sight?'

Screeches from an alarm shatter my trance

The unveiling of his prize sends lightning up my spine

A gaze caught between us with wills about clash

"If we send these guys away will be able to sleep at night?"

Embedded in the silence a decision had to be made:

To protect us from the blue coat wolves, or relegate six little piggies to societal graves?

'How at ten am I entrusted with manipulating life's flowing sands?',

Morality shook with each step took

Locking sight with the chained men in mobile cages

Approached blood-thirsty wolf as he took his time to eye

Placed the jane in hand, and turned... didn't bat an eye

Walked away with a seething urge to run

Paranoid of being the 7th wolfed down, or worse... face misinterpreted guns

The night rolled after reports were filled

My heart being weighed down let normal strain build

'How drastic did the scales of justice swing off my one action.'

Recognizing then, 'All decisions have equal, opposite, sometimes polarizing reactions.'

Felt guilty then, but justified in virtue

Comprehending now, "When They See Us", I covet the chance to say, "I did not mean to hurt you."

Daily I whim between the choice made

Concluding: The action was just, but could have been better played.

Poetry Slam:
Glow-Up, Grow Up Scholarship Slam — CLOSED
This poem is about:
Me
My family
My community
Poetry Terms Demonstrated:
Allusion