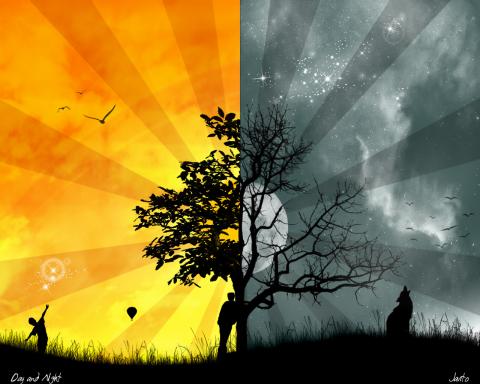 The days slowly creep past me, so suddenly
And as the deepest orange sunray peek upon the horizon before making its appearance.. I'm alive
And as the deepest blue moonlight slowly transitions all that was once sunny into a dimly lit room..
Tonight just like many others... I died.
You see as the orange sunrise reminds me of my once sweetly stained shirts and ashy hands from the citrus of my morning fruit
Those were my glorious times…So with the sunrise, I rise, into empowered times of love, care, innocence, and understanding
But you see as the night falls, and the darkness surrounds me, it only reminds me that night like these the only person that I ever had left to cry to was the moon.
Have you ever wondered why you’ve never seen a picture of a wolf howling at beautiful sunrise?
As the night engulfs me and takes me back to all of my once horrendous nights, with the constant fights, the silence, the stumbles from the door to the couch, the consumption of liquor from the devil stained glass to mouth.
At night, everything becomes much clearer because now the person that’s in the mirror isn’t beautified by dancing sun rays pounding against one's face
Instead, the moonlight illuminates ever flaw that you possess as if to taunt you, and it reveals the darkness that’s deep inside of you…
The real you
Have you ever wondered why they associate yellow with joy and blue or maybe even black with sorrow?
That’s why as the days breeze by I wish that they would stay longer and as the night falls I wish that they would leave longer
Because the beautiful sunrise engulfs all of my honey like memories plucking them from my lightening bug jar very delicately, the one that I put in my room at night to assure me that even when there’s darkness there’s always light.
For hours I would stare, I would stare at into the little balls of sunshine that brightened my night…
And for hours as I sat up through all hours of the night, I would hide from the petrifying moonlight that tangles me into a sea of all of my worst memories and all of my lost dreams
Snatching the pain that dwells deep in the depths of my once shallow soul..
Have you ever wondered why you were never scared of monsters that dwelled in the day?
The only ones that made you tremble were the ones that settled in at night
Have you ever wondered why your skin tone made a difference?
Because were raised to glorify the bright but was always afraid of what lurked in the night..
Is that why mama always told me to get in the house before the street lights?
Because she knew shallow deep that people were afraid of what lurked in the night, and they killed what made them afraid, and they judged what made them afraid so to keep you from trouble, she leads you to light
Is that why freaks only come out at night?
Because they’re too ashamed of what they have become to glance even at themselves in the mirror through the sun rays
But if you swiftly glimpse at a mirror at night, there is nothing but darkness and shapes that you can make out to what you want them to be
So it’s comforting...
To know that you an outline of a human with no particular face, so tonight you could be the virgin because last you were the innocent, but you’ll repent in the morning because as the sun rays awaken you they’ll shed some light on what happened that night.
And now-a-day the rays don’t shine as bright as they use to...
The moon shines brighter than it use too...
Is it because we’ve lost touch with what brighten our lives for the better
And instead have we giving in to darkness that surrounds us every day because even now we’re afraid
… Of what lurks in the night