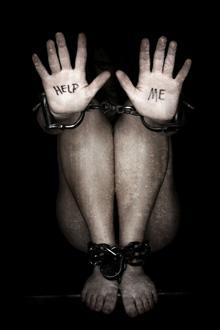 I am no longer the beautifully tinted woman that grew up between the tropical trees and vines of the most alluring forests.
I have dropped the crown of my heritage and shackled ankle's now pull me to carry on, just as others can only be dragged by their lifeless corpse through those sugarcane, bean-pickin', cotton-pickin fields that have ruled our lives since the moment we were enslaved..
I, Along with the men and women along side me with the same lovely cinnamon skin, have been through far too much. Just as my mother's mother and her grandmother, I was forced out of our home onto ships that dropped us off and sold us to a life of whips and solid white fists. But today slavery of wages still keeps us bound and gagged.
Believed that our inherently crisped golden brown skin, the same color as the sand on our beaches back home, are inferior to the pale white, as told on T.V., clear and clean skin.
But my copper skin is a sign unto those who have yet to know. My skin tells the tales of the hearts of my people. Just because we are not as dark as the Sirrah night fall like our other brothers does not mean we are less oppressed.
The fact of the matter is we are not pale enough to pass on as true American Citizen that was originally intended when the bottom of the declaration of the white man's independence was signed.
Step up and realize that whether you are black, copper, golden, or red if you were not white you were enslaved. And even to this day; you are oppressed.

What an amazing and beautiful piece.....I love: "I am no longer the beautifully tinted woman that grew up between the tropical trees ...." fantastic!

Thank you Roland, I think I got that line when I was talking to my great grandmother, who was still around when I was young, and she was always telling me how she loved to play in the forests in Argentina- at least before she knew better.

so truthful! i loved it.

Thank you so much, JordanBree. I'm glad you enjoyed it!

Great work on this, Rebecca!

So insightful!! Amazing job on this :)

Very true! We were all " oppressed" no matter what shade of color we have on our skin.  Your poem puts us all on the same level and I appreciate that for we all need to realize that no skin color is better or worse than the other, but all the same. Thank you for the great message! Keep writing on my friend!

"I have dropped the crown of my heritage and shackled ankles now pull me to carry on, just as others can only be dragged by their lifeless corpse through those sugarcane, bean-pickin', cotton-pickin fields that have ruled our lives since the moment we were enslaved..."

I just love the depth in this line, the perspective of the poem just really shines through. Love it :))

Beautiful and absolutely the truth.

Amazing. i love it, so much passion and raw truth

I love this and I love you, poet

Loved it!! I had too many favorite lines to pick out just one. The whole thing is wonderful and I love the message you're trying to get across!