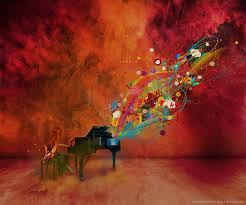 Sweetly orchestrated is the music of which we live by.

Birthed by emotions of hearts so stirred.

To start off as nothing but a feeling, a thought, a word, it takes on the form of note.

it eventually gains the strength to stand upon its opinion of truth,

With its first leap into a seemingly new world of feelings its energy reverberates whithin its soul.

Maturing with every measure it treads.

Without the slightest hinderance the two blend perfectly together.

So balanced they sound as one,

coming to a new struggle as descendants of notes treble round them, tightly.

It strikes, challenging their major with an unfamiiar minor. Mking their chords stress.

The antcipation of beauty becomes a yearning desire.

Building both higher and lower to the pinnacle point of their suvival,

At peace once again the notes carry on for a while.

Its words reamining in the hearts of those who have heard,

As the decrescendo fades it gives way to new emotions and trembling thoughts.

It can never truly die as some say, only silenced.

Its legacy will live on with a different name, but untill then it takes a rest into slumber,