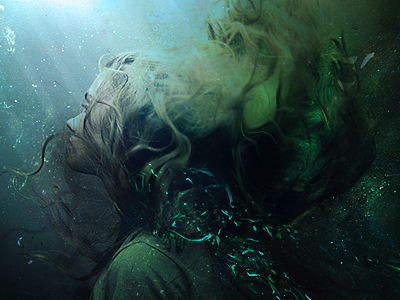 At the pinnacle, she looks down.

The whole world offers itself to her, lying stretched out in front of her like a rippling map.

It bows beneath her and kisses her rocky pedestal with wet, salty lips.

Even at such a high point, she yearns to go higher though climbing won't seem to take her there.

She belongs up "there", that's where her internal compass points.

Out of mountains to climb, the situation calls for a more abstract and creative way of travel.

She's tired of her jagged pedestal, up where the air is too thin to concentrate.

Aggravated, she binds her own limbs with heavy chains.

Too much climbing on hands and feet.

All to get where she is now.

She's worked so hard and has anticipated this view for a long time but it isn't what her soul wants.

She locks the chains nice and tight and she swallows her own key.

Peering down one last time at the world below, she steps to the edge.

The world sings to her of opportunity and experience.

It promises to provide her with the independence she seeks.

She lifts her bulky chains and hurls them over the edge, her body drags after them.

It's what the world asked of her right?

Persuading her to take a chance while it licks it's salty lips.

No baby steps, just a hasty jump off the edge and now she's falling fast and heavy into the world below.

She plummets through the surface of icy waters like a bullet fired from a pistol.

The waters shove their songs of opportunity and experience down her throat before she even has time for one last breath.

Her self-bound chains pull her lethargic body through the waves of promises and into the dark undertow of the real world.

Her body feels as heavy as her negative thoughts which only causes her sink faster, beyond the point where a supportive hand could save her.

She swallowed her own key and tied her own chains so only she can save herself.

The key sits in her stomach like a lump of lead but her internal compass is strong and light.

She allows her soul to take control and it pulls her up, up to the surface where the water parts and allows her to breathe again.

She looks up at her rocky pedestal and at the sky above.

Realizing that her struggles paid off, she is humbled.

The view is much better from here anyways.