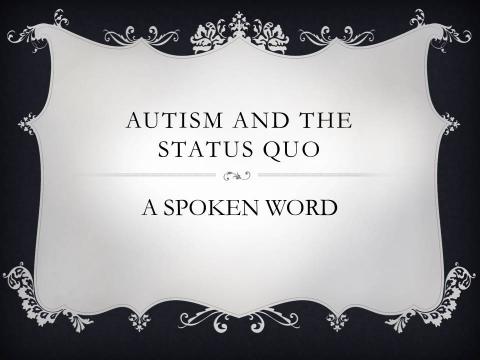 My mom said that being an Autistic is being something special

Or even fight my own fights

And yes…I know we all fall

Because one slip up and they laugh

Or they’ll beat me because I’m “daft”

And when I tell the school staff

They don’t do a thing because they think my I.Q. is half

Of what they think it should be

But the real reason why they pick on me

Is because my mind works differently

Than the status quo tells me I ought to be

You see, the status quo tells us all to behave in a way that they don’t consider weird

And to sneer at those who they consider weird

As you can see, that makes me their mortal enemy

Because “weird” is the new leprosy

And since Autism is “weird,” can’t you see

That they’re trying to get rid of us desperately

So they can go on building their own legacy

Well I’ve got dreams too!

I don’t want to save any damsels in distress

Because beauty is more than just big breast

With the girls who they think are the sexiest

But anyway, back to the point

Because they say “my life is useless”

And it’s all thanks to whom we appoint

Now let me be clear, I’m not talking about any politician

But rather the people who are on a mission

And everyone else just gives them more munitions

They are Celebrities, Actors, and sometimes even Musicians

And we raise them up to be like gods and goddess

Even though the status quo is their main mission

Now let me clarify, I know that there are some Celebrities who are good people at heart

But before you give them your money you should think, “Do I want my children to grow up like them?”

If not, then why should we give them our money if instead, we can pay the physicians

So they can find a more accurate rendition

To people on the Autism Spectrum, that should be our mission

So we can get better college tuition

So we can be better Musicians,

Instead of being the opposition

Of the status quo,

Which, by the way, say that we’re too stupid to be in a place of position

Well guess what, I’ve got a vision too

Only my vision is to eradicate the status quo’s thinking

And throw it to the ends of the earth, like what God does when he forgives our sinning

And give the status quo a new meaning

So that everyone can be accepted, that’s what I’m dreaming

And I’ve only got one question for you guys

The question is “whose with me”

To fix the status quo so it’s about morality

So everyone regardless of whether or not there’re Autistic or Normal, Black or White, Asian or Caucasian, Beautiful or Suffering, Male or Female, Christian or Islamic, Atheist of Buddhist

It doesn’t matter who they are, anyone and everyone can live a nice life

And it all starts with you

I’m done…no wait, I got one more point

To those of you who might be wondering who “they” are

Well, in reality, “they” can be any of us in this very room

They can do anything from using us as punching bags, or to sexually abuse us

To simply ridicule us just for being ourselves, or even to think badly of us

And I’ll be the first to admit, I demoralized my own kind too

But I’m over that now, that’s not what I want to do

And it’s not too late for you either

I urge you to think twice about us before you allow

Yourself to judge us, to damn us to the pits of the hell

That you guys created just for us, it is that kind of thinking that we should disallow

So I ask again, “whose with me”

But think twice before you make your judgment call

Because if we say even one thing wrong, the status quo will damn us all

But in reality, it’s not like they don’t care about us anyway though

Because false judgment, is what originally started the status quo

Poetry Slam:
What Would You Change Scholarship Slam - CLOSED
Guide that inspired this poem:
Bullying