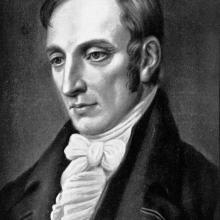 William Wordsworth was born in Cockermouth, Cumbria, England on April 7, 1770. His mother died when he was eight and her death would later influence his work. Wordsworth attended Hawkshead Grammar School, where his love of poetry was fostered; after Hawkshead, Wordsworth studied at St. John’s College in Cambridge and before his final semester, he set out on a walking tour of Europe. In 1802, Woodsworth married Mary Hutchinson, a childhood friend, and they had five children together. Wordsworth’s most famous work, The Prelude, published in 1850, is considered by many to be "the crowning achievement of English romanticism".

When matched to William Wordsworth, it means that similarities have been found between your poetic style and the themes and literary techniques typically seen in works by this famous poet. For example, you might use powerful simile and strong imagery the same way that Wordsworth does. Recognizing these similarities is important because it gives you information about the history of your poetic style, which poets might inspire you, and what writing techniques you should try next.

Try using alliteration, simile, and imagery more often. You might also like experimenting with symbolism involving nature and themes involving the championship of the individual.