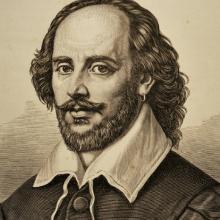 William Shakespeare was born in Stratford-upon-Avon on April 23, 1564 and was educated at the King Edward VI Grammar School in Stratford (where he learned Latin and a little Greek). At eighteen years old, he married Anne Hathaway, and they raised two daughters: Susanna and Judith. In 1599, Shakespeare joined a group of Lord Chamberlain’s Men that would form a union to build the Globe, which became the most famous theater of its time. Of the more than thirty plays that Shakespeare wrote during his lifetime only eighteen of Shakespeare’s plays were published separately during his lifetime and a complete collection of his works did not appear until the publication of the First Folio in 1623, several years after his death in April of 1616.

When matched to William Shakespeare, it means that similarities have been found between your poetic style and the themes and literary techniques typically seen in works by this famous poet. For example, you might use powerful metaphor and strong repetition the same way that Shakespeare does. Recognizing these similarities is important because it gives you information about the history of your poetic style, which poets might inspire you, and what writing techniques you should try next.

Try using allusion, repetition, and metaphor more often. You might also like experimenting with irony and rich vivid imagery.